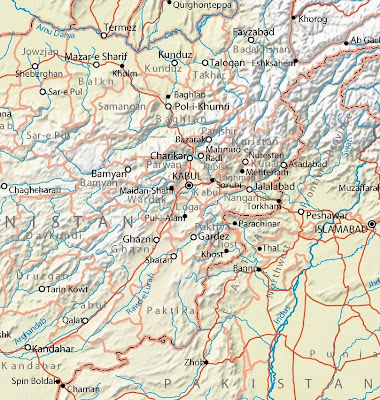 88 Days to Kandahar: a CIA Diary (2015) shares its main fault with many other memoirs by public officials: the author comes across as such a wise, clever and disinterested hero that you have to wonder how much of it is really true. But even so it is a fascinating look at a remarkable series of events, the overthrow of the Taliban in Afghanistan and then the slow dissipation of that victory. As Grenier's title reminds us, it was only 88 days from 9-11 to Hamid Karzai's triumphal entry into Kandahar on December 7, which put an end to the first phase of the Afghan war. This was a remarkable achievement that I and many others considered well-nigh impossible at the time, and Grenier had as big a part in it as any American, so his story is worth considering.

Grenier, a career CIA man, was head of the station in Islamabad, Pakistan from 1999 to 2002. This put him on the front lines of conflict as our efforts to catch Osama bin Laden steadily intensified over the course of 2000 and 2001 and then went into high gear after the towers came crashing down. Because he had already been trying for years to get the Taliban to give up bin Laden, or else to engineer their overthrow, Grenier had a clear idea of which would be required to do this. In his telling he actually wrote a cable that became the basis of the American war plan: let the many anti-Taliban Afghans do the main fighting, supported by US weapons, cash, and air power, sending in no US soldiers beyond special forces spotters needed to call in air strikes.

Of anti-Taliban Afghans, there were in Grenier's mind two kinds: those within the Taliban's own Pashtun ethnic group, by far the largest in Afghanistan, and those from the assortment of other ethnicities that dominate the northern part of the country. For a several years civil war had raged in Afghanistan between the Taliban and a group called the Northern Alliance, which by September 2001 clung to power only in the northern mountains. While many Americans wanted to make the Northern Alliance the center of our plans, Grenier was vehemently opposed to this. Because the Northern Alliance was made up almost entirely of non-Pashtuns, it would never be accepted as a legitimate government by Pashtuns, who made up 50 to 60 percent of Afghanistan's people. Also, the Northern Alliance had been supported for years by India and Iran, enemies of Pakistan. Pakistan had always been the main international supporter of the Taliban. Grenier did not believe the Taliban could be defeated if Pakistan did not help, and Pakistan would not help put clients of India and Iran into power. 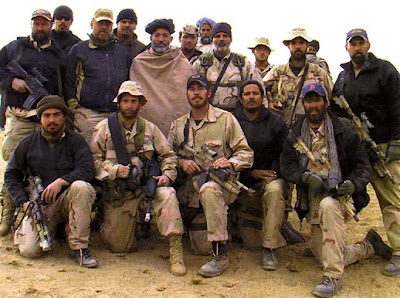 Grenier could not stop the Pentagon from rushing support to the Northern Alliance, and with help from massive US bombing attacks they broke out of the mountains and began to advance on Kabul. Meanwhile Grenier and his CIA colleagues desperately tried to get some sort of revolt started among the Pashtuns. Some of this was quite farcical. Grenier had long conversations with one Taliban commander, trying to persuade him to overthrow Mullah Omar (the Taliban's blind leader) and drive the al Qaeda Arabs out of the country. The commander eventually said, "Your offer is very interesting, I will have to talk it over with Mullah Omar." Grenier realized, he says, that although the Taliban commanders were brave in battle they were terrified of facing a future without Omar's guidance, and the CIA was never able to induce any significant Taliban leader to turn against him. Of other Pashtun "leaders" willing to accept CIA aid there were very many, but most of them were useless boasters. Only two ended up having any significance, Hamid Karzai and Gul Agha, the former governor of Kandahar. Both of these men were allowed by the Pakistanis to enter Afghanistan at the head of perhaps a hundred armed followers each. Supported by US airstrikes, called in by special forces spotters, they advanced toward the Taliban stronghold of Kandahar, Karzai from the north and Gul Agha from the east. Grenier's account of these advances is bizarre. Neither commander ever had more than about 150 loyal soldiers, but as they advanced they were regularly joined by up to a thousand locals whose tribal sheikhs had decided to turn against the Taliban. Thus reinforced they would march on for a while until they entered a new district, at which one set of temporary followers would melt away -- taking with them new AK-47s supplied by the US and Pakistan -- and a new set would gather, necessitating a new shipment of guns. The Taliban, says Grenier, were paralyzed, unable to agree on a response. When they did manage to assemble a force they kept sending them into battle in tight columns of vehicles, easy prey for American planes.

Thus Karzai and Gul Agha drove the Taliban from their stronghold, overthrowing the rulers of a nation of 20 million people at the head of only a few hundred soldiers.

As to what happened later, Grenier has a very interesting take. He argues that the Taliban were not really completely defeated. They had simply suffered such severe losses in such a short time that they were willing to step aside. (This is the medieval attitude toward the role of violence in politics I wrote about here.) They handed their Arab friends over to the US and accepted Karzai as the national leader, but they did not expect to be punished for their past deeds. In fact they thought they would still be part of Afghanistan's power structure going forward. Most Pashtuns had never really loved the Taliban and were glad to see the backs of bin Laden's arrogant Arabs, but they had no particular loyalty to Karzai and wanted the Americans gone as soon as possible. However, the Americans and Karzai (who hated the Taliban for killing several members of his family) treated the Taliban as if they had been completely beaten. For example, several Taliban leaders were arrested by the Americans or the Pakistanis and spent years at Guantanamo; these included the Taliban's ambassador to Pakistan, who swears to this day that Karzai promised him immunity if he switched sides. George W. Bush promised in public many times that we would "never negotiate" with the Taliban, which made it all but impossible to integrate any Taliban elements into the new state.  Since the Taliban's organization was still largely intact and they were still heavily armed, this attempt to humiliate and exclude them led very quickly to the armed insurgency that continues. Many other Pashtuns found that in practice Karzai's government was no better than the Taliban's, so they had (and have) no interest in fighting for him and have tried to sit out the US-Taliban war.

The Afghan war was initially so successful, says Grenier, because its aims and methods were strictly limited. It failed because the US refused to accept that limited victory and pushed for something much more grand and complete:


Immediately after 9/11, in  decisions in which I played some role, we sensibly limited the means we would employ in pursuit of our goals those that would and could be achieved by Afghans, knowing that only those could be sustained. Our current abandonment of Afghanistan is the project of a subsequent colossal overreach, from 2005 onward, which ultimately saw the deployment of 100,000 American troops, supplemented by another 40,000 from NATO and allied nations, and the expenditure, at our peak of some $100 billion a year.

In the process, we overwhelmed a primitive country, with a largely illiterate population, a tiny agrarian economy, a tribal social structure, and nascent national institutions. We triggered massive corruption through our profligacy; convinced a substantial number of Afghans that we were, in fact, occupiers; and facilitated the resurgence of the Taliban. For all the billions spent and lives lot, there is little to show, and most of that will not long survive our departure. If there is a principal reason for that catastrophic lapse in collective judgment, it is that we decided, in typically American fashion, that failure was not an option. If Afghans were transparently unable to make of their country what we believed it needed to be in order to achieve our notion of victory, then by God we would do it for them.

Of course we did not. Revolutionizing Afghanistan proved beyond our capabilities, or at least beyond what we were willing to do on top of the even larger commitment to Iraq. (Like every other book I have read about the Afghan war, Grenier's emphasizes that once the invasion of Iraq got under way our efforts in Afghanistan were crippled by diversions of money, equipment, personnel, and especially attention.) This combination of overreach in our aims with failure of will, says Grenier, has been disastrous for Afghanistan and even more for Pakistan, which has suffered terribly from violence spilling across the border. As for our original goal of fighting terrorism, we have failed utterly; terrorism is a worse problem than ever, and terrorist safe havens multiply across the region.

The contrast between our initial rapid triumph in Afghanistan and the slow, sordid unraveling of that  victory is somber. The unraveling was accompanied by electoral politics in the US, controversies over torture (which Grenier makes a lame attempt to justify), war scares between India and Pakistan, bureaucratic infighting, and many other catastrophes. But ultimately it represents a failure to admit that the world is not ours to control.
Posted by John at 8:12 AM