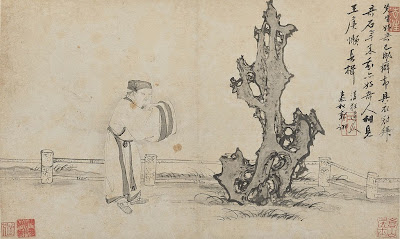 Mi Fu (1051-1107) achieved the greatest honor attainable by any Chinese notable, becoming part of one of those iconic numbered lists; he was one of the Four Great Calligraphers of the Song Dynasty. He was also renowned as a painter, but especially as a connoisseur whose taste was consulted by the Huizong Emperor and other notables. This despite (because of?) a reputation for eccentricity that led to his being remembered as Madman Mi.


He was one of the most famous art connoisseurs in Chinese history. And he was also known for walking the streets of Hangzhou dressed in the fashions of 500 years earlier. When asked why he did it, he replied, “Because I like the styles from back then.” . . . Not only did he walk the streets dressed in clothes from the Tang dynasty, but he was also known for introducing himself and bowing to especially fine specimens of garden rocks, which he collected, often addressing them politely as “elder brother.” Greatly admired by Emperor Huizong for his knowledge and style, he was appointed Director of the Calligraphy and Painting Institute at Court, where the Prime Minister was said to have observed, “Mi Fu is the kind of person we must have one of, but cannot afford to have two of!”

Spending his later years roaming the waterways of the country on his houseboat, named “The Mi Family Calligraphy and Painting Barge,” he managed to acquire an immense collection of important works of calligraphy, painting, ancient bronzes, and other antiquities. His acquisitions were sometimes of a dubious method as he was known to have replaced some originals of borrowed works with replicas, and on more than one occasion threatened suicide to friends who wouldn't agree to sell their masterpieces to him. He was also reported to have stolen the plaques from temple gates because they provided fine samples of a particular style of calligraphy. His foibles were usually forgiven, though, because of course he was considered a genius.

That his patron was the last emperor of the Northern Song, before half the kingdom was overrun by barbarians and the court fled to the south, probably enhanced Mi's reputation for mad decadence. The Huizong Emperor was himself something of a mad aesthetician; among other things he was the author of the definitive treatise on the Song-style tea ceremony. Just reading about this you can feel the barbarians gathering on the steppes, sharpening their swords. . . . That's Mi at the top bowing to a rock, in a painting of 1503. 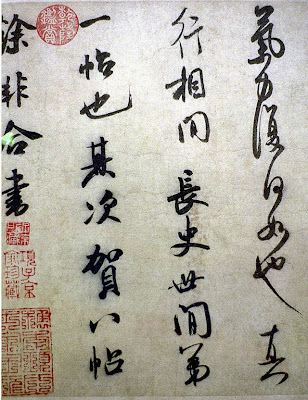 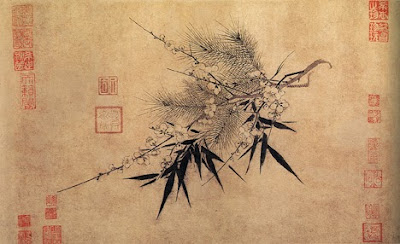 Something to consider.
Posted by John at 7:49 AM