What If Global Warming is Postponing a New Ice Age?

The combination of atmospheric physics and historical geology seems to prove that carbon dioxide in the atmosphere warms the planet. How much may depend on particular circumstances, but the basic effect does not seem in doubt. So the current, historically high level of atmospheric CO2 is reason to worry; we don't know how hot the earth might get over the next century, or how much of the polar ice will melt. 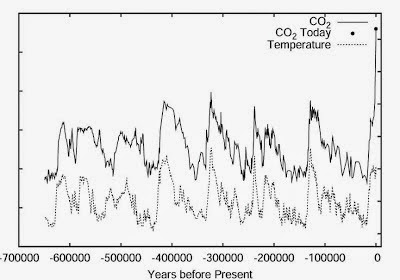 The thing is, compared to most of the past 2 million years, it is already very warm on the earth. We are what geologists call an interglacial era, a time between ice ages. The cycle seems to be driven by wobbles in the orbit of the earth, so the timing ought to be fairly consistent. And if this interglacial were like the last two, the temperature should be falling by now. But it isn't. Some scientists -- including my only close friend who is a climate expert -- feel certain that our warm period is being extended by human CO2 emissions. To these scientists, the "Little Ice Age" that started around 1250 CE ought to have been the start of a new downward trend in the temperature, but coal burning and forest clearing turned things around and made the planet warm again.

A new study just published in Nature Geoscience makes the argument quantitative. The authors believe that a new Ice Age would certainly begin within the next 1,500 years, but high atmospheric CO2 levels are preventing this. Right now the level is about 390 ppm, and these calculations show that it would have to fall below 240 ppm for the glaciers to resume spreading.

I don't mean by this to dismiss worries about climate change or to argue that it is really a good thing. Compare those numbers: right now the CO2 level is vastly higher than it would have to be to prevent another Ice Age, and it is still rising rapidly; scalding seems like a much more immediate threat than freezing. But it is important to remember that the earth's climate is always changing. Compared to most of the past 2 million years, it is warm on the earth, but compared to most of the 100 million years before that we are a frigid era. On the whole the earth seems to be getting colder, too, with recent Ice Ages colder and longer than they were before. What impact our vast experiment in changing the atmosphere will have on this complex system is very hard to predict, but disaster is certainly within the bounds of the possible.
Posted by John at 7:40 AM