A Grand Experiment in Raising the Minimum Wage 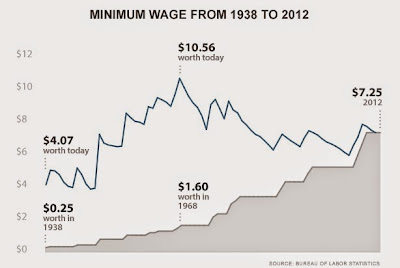 I am all for raising the minimum wage. The current Federal $7.25 figure is lower in real terms than the value in the 1960s, when the nation was much poorer than it is now, so a substantial raise ought to be possible without economic disruption. With the nation increasingly concerned about economic inequality, here is a concrete step we could easily take to help poor workers.

But how much should we raise it? Democrats in Congress have settled on a plan to raise the Federal wage to $12/hour. Not waiting for Congress, a new living wage movement in America is raising its ambitions higher, and they are having success: Los Angeles has just joined San Francisco and a few other cities in setting a minimum wage of $15. Is that too high?

Now obviously must be some level at which a minimum wage would be economically destructive, leading to massive job losses, business failure, or the replacement of legal by illegal workers. As far as I can see, there is no agreement among economists as to what that level might be, studies producing results that agree with their authors' ideological preconceptions.

So let's find out. If a $15/hour minimum wage is destructive to small businesses, the experiment in Los Angeles ought to tell us. San Francisco is a small and strange place, its economy inflated by tech-stock millionaires. But LA is a big, sprawling city with millions of poor and middle class residents. If the new wage is bad for them, we'll find out. And if it works, we can expand the push to other places.

Let the experiment begin.
Posted by John at 7:22 AM