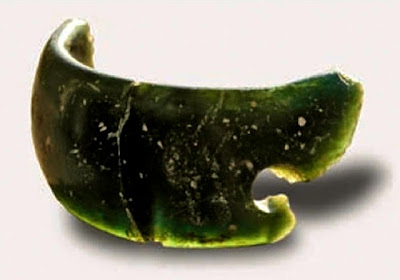 Russian archaeologists discovered this lovely chlorite bracelet in Denisova Cave, Siberia, in 2008, and after extensive study they now assert that it is 40,000 years old. That would make it the oldest surviving piece of ground and polished stone. That technology was, it seems, used for making jewelry 25,000 years before anybody used it to make practical objects like tools.

The really controversial part of the Russian claim is that this bracelet was not made by fully modern humans, but by Denisovans. Denisovans were the mysterious early modern humans of east Asia, comparable to the Neanderthals of west Asia and Europe. The Denisovans were discovered through genetic analysis and we know next to nothing about their culture, but if they were ahead of modern humans in any way that would be big news.
Posted by John at 8:21 AM

I perused the article, but they don't actually state what method of dating they used here.

Optical dating would fit the time frame easily, as well as the find being in a cave unexposed to sunlight, but I don't know how suited this particular stone material is to such methods or how accurately they could date the artifact.

Unfortunately, the article does talk an awful lot about the location site, which is apparently reknowned for being a Denisovan site - which makes me wonder just how much bias they may be unwittingly allowing into their dismissal of the possibility of later layer contimanation.

I just find that far too often, these things get reported on prematurely for the sake of drumming up publicity and financial support. But as Mark Twain once wrote, "One gets such wholesale returns of conjecture out of such a trifling investment of fact."

Invocations of Atlantis, postulations on time travelers, speciest comparisons of Denisovians to Leprechauns and halflings, and worse - all seemingly entirely serious.

The one useful bit of commentary I saw was someone bringing up the high relative softness of chlorite compared to most other stones and minerals, which would make working it quite easy compared to more common 'jewelry' materials like jade. I agree with the notion that this would make drilling quite easy, and personally could imagine accomplishing such shaping with simple tools of knapped flint or similar set into a wooden shaft and spun by hand or even by bow, using the same sort of motions one employs to start a fire using a pair of sticks.