Do the Poor Have it Easy? 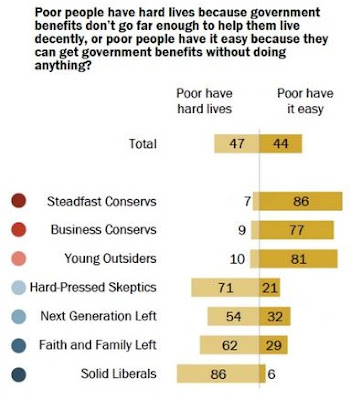 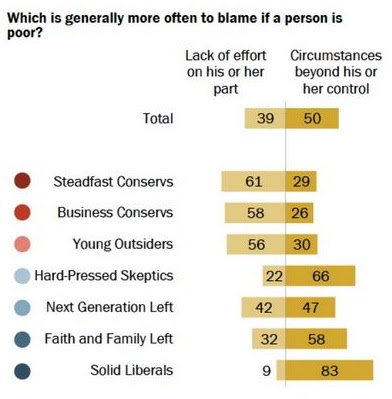 Argh, this is a really discouraging. Here is a poll -- snipped in half and rearranged so you can read it at the scale Blogger allows -- showing American attitudes toward poverty, as determined by Pew. The second part is hardly surprising, since this difference has been one of the major left-right divides for centuries. I do find it interesting that young leftists ("next generation") are quicker to blame the poor for their problems than their elders; I have noticed that young people are in general quick to condemn others for their misdeeds, and little interested in explanations. I know I was like that.

The horror of this is in the first section. Poor Americans do not "have it easy." Poor Americans, in fact, have it very hard. Money makes life easier. Money can be substituted for effort in a million ways, and not having money means all sorts of extra trouble. Most especially, not having money causes anxiety, which as I regularly say is the besetting problem of poverty in the modern world. Poor people live ten years less than rich people because all the worrying they do wears ten years off their lives.

The root of all truly ethical behavior is compassion. If you think poor people have it easy, you simply lack understanding of their lives, and, I think, lack compassion for them. Is that Christian? Is that right?
Posted by John at 8:44 PM

Christianity was born in poverty - a carpenter's son swearing off material comforts to lead a life as a roving philosopher reformist; fighting against an entrenched, corrupt, wealthy religious elite; breaking all ties to the old social order, disowning his family, and instead consorting with the lepers and the prostitutes and all of Judea's poorest and most wretched.

But then, within a few generations, it had become the new establishment. The Church became a political body, then a government unto itself, then a quasi-empire with powerful influence over most of the known world. And while the selfless few who fought to help the poor often became saints, by and large The Church stopped focusing on the wellbeing of mankind and starting focusing on the wellbeing of themselves.

Most American Christians today are inheritors of a twisted legacy of judgemental self interest, handed down through dozens of cultures over two millenia of change and strife. They are utterly divorced from the original teachings of their religion, just as they are from the sufferings of the poor. They don't believe in the values their supposed saviour espoused, they merely wear his iconography as a badge of conceited exclusivity and superiority. The essentially belong to the "J. H. Christ Country Club".