The Genetic Decline of the Wrangel Island Mammoths 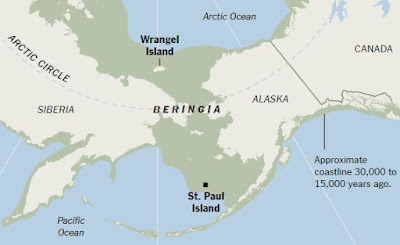 I've always found the demise of the Wrangel Island miniature mammoth to be a sad story. They survived much longer than the mammoths of the mainland and a thousand years longer than the mammoths of another refuge, St. Paul Island; so far as we can tell they went extinct around 4,000 years ago. In their remote home human predation was probably not a factor. So what killed them?

A complete genome has now been extracted from a Wrangel Island mammoth's tooth, and comparing that to the genomes of older mainland mammoths shows dramatic genetic decline:


The dwindling population during this 40,000 year period suffered a reduction in genetic diversity of some 20 percent, the Swedish team reported, suggesting that the lesser fitness of the Wrangel mammoths might have contributed to their extinction.

In fact, the Wrangel mammoth’s genome carried so many detrimental mutations that the population had suffered a “genomic meltdown,” according to Rebekah Rogers and Montgomery Slatkin of the University of California, Berkeley. Analyzing the Swedish team’s mammoth data at the gene level, they found that many genes had accumulated mutations that would have halted synthesis of proteins before they were complete, making the proteins useless.

The best guess, based on genetic and environmental data, is that the mammoths had a breeding population of around 300, and that does not seem to have been enough to maintain a healthy genome over thousands of years. So like the wolves of Isle Royale, the mammoths eventually died of bad genes.
Posted by John at 7:32 AM