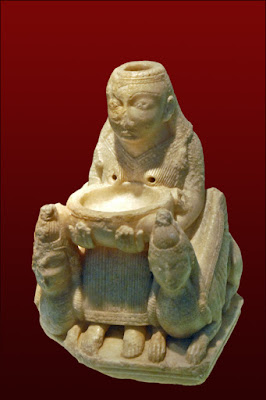 Iron Age Iberia is just my sort of place, hovering on the edge of our knowledge, mentioned in various ancient texts but not really described until the Romans fought the Carthaginians on its shores. Even then, of course, our writers were mostly interested in Romans and Carthaginians, not Iberians, so they didn't tell us much about the inhabitants. We know that the coastal cities had been founded by Phoenicians and remained for centuries dominated by Phoenicia and then Carthage; we know that some of the interior peoples were related to the Celts of Gaul in both language and (as the Romans saw it) habits; we know that there were other peoples in the peninsula speaking languages that were neither Celtic nor Phoenician, and that some of these languages were Indo-European and others were not. 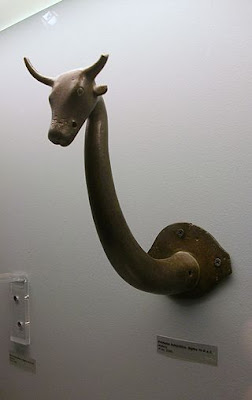 Fortunately Iberia has a wonderful archaeological record, and there have been many splendid discoveries. In the archaeological record we can watch the rise of western Europe's first walled towns, and then a vibrant Bronze Age culture based partly on mining copper that was traded as far as Mesopotamia. The Phoenicians arrived in the 9th century BCE and built cities at several harbors. By the 6th century BCE there were Celts in the peninsula, but how many and how much they changed the lands they seem to have conquered are very much disputed. 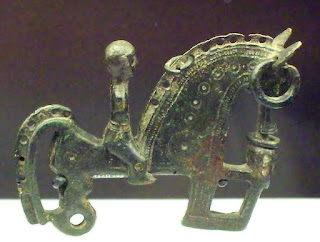 Besides the Roman texts we have other evidence that people were speaking Celtic languages, specifically a series of bronze plaques with writing in an alphabet derived from Greek, not fully translated but obviously in some form of Celtic. There are also artifacts like this fibula. We call these people the Celtiberians. 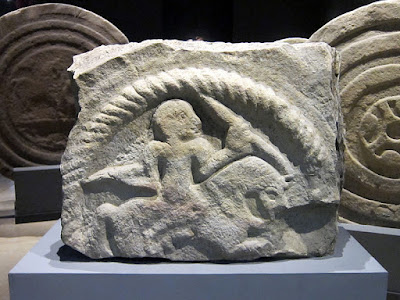 Spain has produced many amazing stelae dating to the Bronze and Iron Ages. 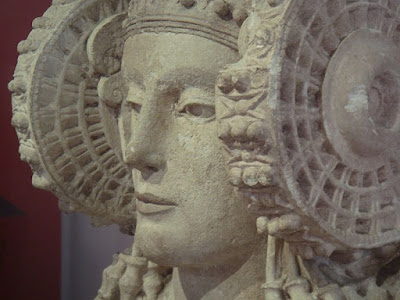 I was moved to write about ancient Iberia by the series of stone statues known in Spanish as "Damas," or Ladies. At the top of the post is the Lady of Galera; above is the Lady of Elche. 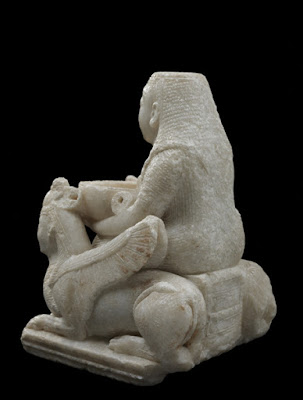 These figures span several centuries. The Lady of Galera is one of the oldest, dating to the 7th century BCE. This small stone figurine is very much Middle Eastern in style, and it may even have been made in Phoenicia. 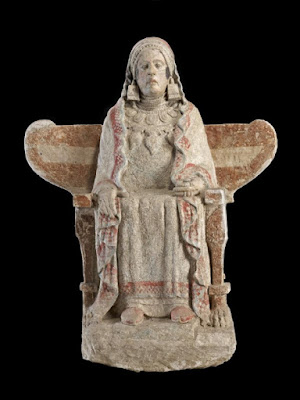 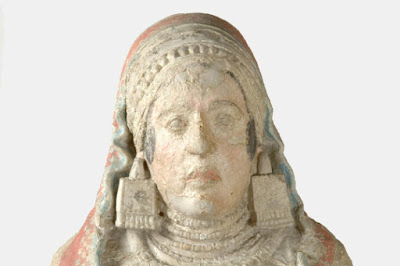 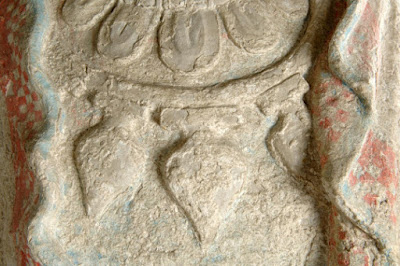 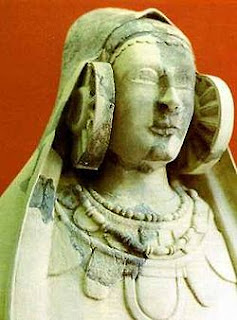 The Lady of Guadamar, c. 400 BCE. This was reassembled from fragments, since before it was put in the ground it had been intentionally smashed and burned. All of these figures are Middle Eastern in inspiration, and they are usually interpreted as images of the goddess Astarte. But they have not all been found in Phoenician sites; in fact some are known to have come from Celtiberian temples and tombs. 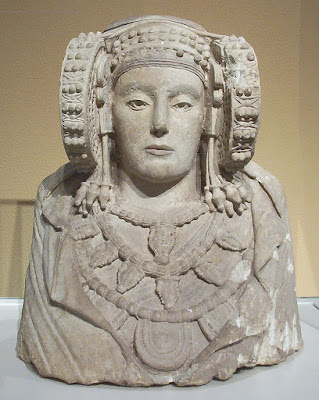 The last in the series in the Lady of Elche, dating to around 250 BCE. Besides Middle Eastern ideas about the Great Goddess this one also draws on the Greek artistic tradition, tying the Celtiberian site where it was found to both civilizations.

As to why I bring this up, consider: if I asked you whether the Celts of Gaul or Britain had been in close contact with the ancient civilizations of the Middle East, what would you have said? Through Iberia, they were. These statues are only the most famous signs of contact that was frequent and endured for centuries. Other evidence of contact abounds, from Phoenician glass in Celtiberian tombs to the fact that much of Hannibal's army was made up of Celtiberian soldiers.

European historians used to believe that whatever bits of Middle Eastern civilization reached Europe did so by way of Greece, but that is not so. There were many connections in the ancient world, like the ones that somehow carried the Chinese tale of Cinderella to Europe, or Babylonian astronomy to Bronze Age Germany, or the goddess Astarte to Spain. 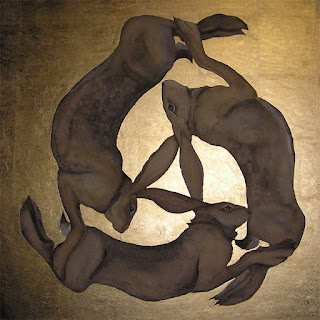 Or spread the Three Hares from China to Wales.

The ancient world was a connected world, and the same links that carried tin from Cornwall to Italy, amber from the Baltic to Egypt, and glass from Egypt to Ireland, could also have carried images and ideas. So if certain motifs in early medieval Celtic stories resemble Christian lore, that might indicate a direct borrowing from Christian sources. But then again it might be that both derive from an older stratum of Middle Eastern legend, the source of things like the Flood, Jacob's Ladder, and much about our traditional image of the Virgin Mary. The virgin birth, the rebirth of the divine son, holy water that purifies – these are ancient, ancient ideas, and they could have spread around the world in many ways. The elite of pre-Roman Gaul and Britain were not isolated bumpkins, but the leaders of an old, literate civilization with ties to many other peoples across Eurasia.
Posted by John at 9:26 PM