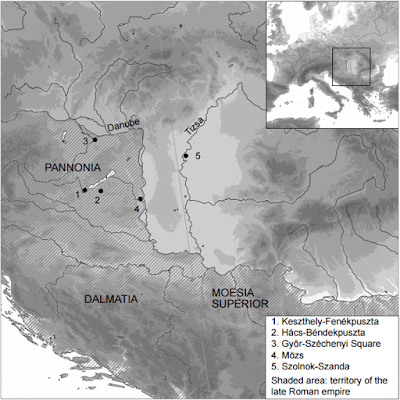 Interesting study in the news this week based on 200 skeletons from five sites in 5th century Pannonia, a frontier province of the Roman Empire now in Hungary. Cambridge archaeologist Susanne Hakenbeck and her colleagues studied the trace elements in the bones, which provide clues as to where people grew up and what they ate. They found great diversity in their sample. Some of the people seemed to have eaten a meat-heavy nomad diet, others a peasant, cereal-based diet. A majority had elemental signatures matching the place they were buried, but others had very different signatures suggesting that they grew up far away. In terms of grave goods and burial style, the graves were much more consistent and much more in keeping with local habits.

Their conclusion is that this was a population in flux, with many people moving around and some entering the population from far away. They chose to focus on Pannonia both because ancient written sources suggest it was an area of intense conflict and much population change, and because the Hungarian plain is ecologically suitable for both agriculture and pastoralism, which have at times existed side-by-side there. It seems that they probably did so in the fifth century.

New stories about this find are playing up a weird "Huns were not barbarians" angle that I don't really understand. Just because different kinds of people coexisted doesn't mean they did so peacefully; in fact the written history and other archaeological evidence (e.g., the many buried treasures) both show that they experienced very high levels of violence. Still, they did coexist. 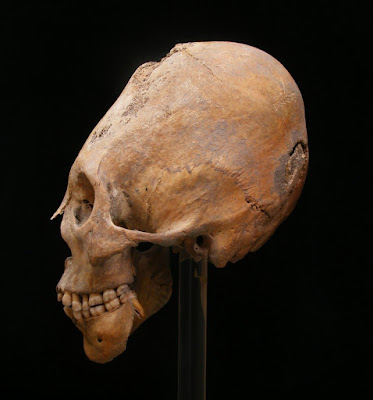 I am personally a bit skeptical about all this elemental analysis, because I don't think we have a really good baseline showing how much variation there is in these numbers within and between populations. But there is other evidence of mixed populations in this area, for example skulls distorted in the nomad way like this one from the Hungarian National Museum. Across western Europe these "Hunnish" skulls have been recovered from cemeteries containing mostly ordinary-looking Roman skeletons. The written record also makes clear that there was a large amount of mixing going on, leading to the formation of new pseudo-ethnicities like "Visigoth."

So I would say that this bone chemistry is another piece of evidence that the fifth century really was a "time of wandering" as the old historians had it, with many thousands of people in motion across thousands of miles. All that movement and mixing had effects in many small, ordinary places, where suddenly your neighbors might be members of a strange barbarian tribe, burying their own dead in the same cemeteries where your grandparents lay.
Posted by John at 9:06 AM

Isn't this all pretty much what you'd expect from a frontier area?

Compare to our own American frontier periods. Consider all the various cultures that interacted and intermixed in all sorts of ways.

You had your nomadic native hunters and then your European fur trappers, you had your sedentary native farmers and newly arrived European homesteaders, you had people of a half dozen different cultures and ways of life moving about across thousands of miles. Sometimes the European interlopers and the Native American locals got into bloody conflict. Other times, they traded peacefully and even intermarried. Some natives took on European dress and manners, some Europeans "went native" and adopted the culture of some "barbarian" tribe that appealed to them more than "civilized" life ever could.

Why should it come as any surprise that the same things happened on a comparable Roman frontier?