Something to ponder: what is this story doing on the cover of the very Trump-friendly National Enquirer: 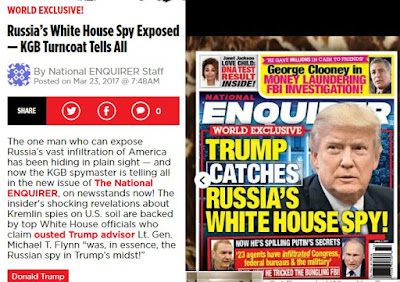 On the one hand it makes Trump out to be a sort of hero; but on the other, this is the man he picked to advise his campaign and then serve as National Security Adviser. Is this supposed to help Trump with the whole Russian connection thing by pinning it all on Flynn? Seems to me that might well backfire, adding "Trump is pals with Russian agents" to the rest of his problems. Plus as we saw with Hillary's emails a scandal can come to be framed in a single word – in this case "Russia" – and repeating that word, even in the context of refuting the allegations, can just reinforce in everyone's mind that there is a big scandal going on.

"Is this supposed to help Trump with the whole Russian connection thing by pinning it all on Flynn?"

The mistake you're making here is in assuming the National Enquirer cares about anything at all other than selling copies and making money by any means.

They have no loyalty to anybody or anything. They have no interest in seeing Trump succeed, nor in seeing him fall. The one and only thing they care about is their bottom line, and they will print whatever nonsense they think will stir up the most outrage and controversy, and attract the largest number of readers by staying just plausible enough to appeal to the lowest common denominator.

But what about their recent support for Trump? Let me remind you once again - they will literally say anything so long as they make money from doing so.

Why would they sing Trump's praises? Because they could profit off of doing so - either exploiting the current political climate for themselves, or striking a deal directly with Donald himself. The newly elected president asks the National Enquirer to shill for him in exchange for money or favors? What possible reason would anyone have to think they wouldn't accept that deal?

Why would they suddenly stop singing Trump's praises? Because they could profit even more off of doing so. Either they decided for themselves that it would draw more readers to change their stance, or if they had a deal with Donald he either didn't honor it or got outbid by someone else.