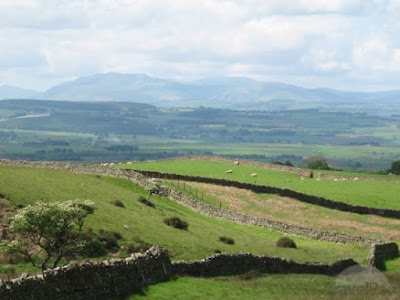 James Rebanks grew up in a shepherding family in England's Lake District, and these days he still owns and runs a farm there. His much-praised book is a disorganized hodgepodge of personal memoir, family history, paean to the landscape, and primer on traditional sheep farming. But somehow it all holds together to leave in the mind a profound impression both of this man and of the way of life he was born into and chose in maturity to make his own.

The Lake District is one of those mountainous regions where traditional livestock farming survives as it does nowhere else. The sheep spend the summer in high common pastures they call "fells," pretty much taking care of themselves. In the fall they are brought down from the fells to the farms. Most of the males are sold off to butchers, a few others as breeding stock for lowland farmers who find that crossing their sheep with rugged mountain breeds every few generations helps to keep their herds vigorous. Then the great flocks of ewes are mated with a few lucky males called "tups," carefully chosen to bring the right characteristics into the herd, and they spend the cold seasons on lowland farms or in protected pens eating hay. Spring is lambing season, the crux of the shepherd's year, when they find out how well their ewes have survived the winter and whether the breeding choices they made in the fall have worked out. Once the lambs are strong enough the flock heads back up the mountain again. The cycle has repeated across Eurasia for thousands of years.

If you are interested in these things, read James Rebanks; he is a learned guide to this world and an excellent companion. I especially loved the account of his ambivalent relationship with the outside world. As a youth he hated school with a grim bitterness, and left it as soon as he could. Eventually, though, he discovered a love of books and learning and went back to school, in the end graduating from Oxford; but with his degree in hand he went back to the Lake District to farm, nothing about the wider world having tempted him away for long.

But I wanted to write about this book as it fits into ideas I have been developing here about work. Shepherding is grueling labor that has to be done 365 days a year, including horrific days out in the snows and cold rains of winter. But James Rebanks loves this work in a way that nobody I know loves his or her job:


Working up these mountains is as good as it gets, at least as long as you are not freezing or sodden (though even then you feel alive in ways that I don't in modern life behind glass). There is a thrill in the timelessness up there; I have always liked the feeling of carrying on something bigger than me, something that stretches back through other hands and other eyes into the depths of time. To work there is a humbling thing, the opposite of conquering a mountain if you like; it liberates your from any illusion of self-importance. I am only one of the current graziers on our fell (and one of the smaller and more recently established ones at that), a small link in a very long chain. Perhaps no one will care that I owned the sheep that grazed part of these mountains in a hundred years' time. They won't know my name. But that doesn't matter. If they stand up on that fell and do the things we do, they will owe me a tiny unspoken debt for once keeping part of it going, just as I owe all those who came before a debt for getting it this far.

He describes lying on his back in one of his pastures, a dog on either side:


I breathe in the cool mountain air, and watch a plane chalking a trail across the blue of the sky.
The ewes call to the lambs, following them as they climb up the crags.
This is my life.
I want for no other.

Of course there is something a little bit false about this idyll, because the life of a shepherd in the European mountains is not economically self-sustaining and has not been for at least 200 years. Rebanks and his neighbors drive Land Rovers to sheep auctions, ride 4-wheel ATVs up to their mountain pastures, douse their sheep with insecticide that keeps off flies. Raising sheep in this rugged, unproductive landscape could never yield such riches on its own. Rebanks describes how young men leave the hills for work in the lowlands – mining, industry, or in his case editing a magazine in London. Eventually some of them return and buy farms, or lease them, or inherit them and invest their lowland earnings in fixing them up and improving their herds. Mountain farming has been subsidized in this way for centuries. Now of course there are other subsidies, paid by governments to maintain traditional haymaking practices that encourage biodiversity, or by the National Trust, which owns the land where Rebanks summers his sheep and charges him no rent. Even so it is hard to make mountain farming pay what we consider a living wage, and many farmers have second jobs in the lowlands. Rebanks himself works for UNECSO as an expert on tourism in traditional farming areas.

Think about that; this is work some people love so much that they take a second job to be able to do it.

Shepherding is an all-encompassing culture, with its own rituals, its own vocabulary, its own lore. It intensely involves both the body and the mind. There are thousands of things to know about sheep, the land, the economics of farming. Rebanks can spot a sick ewe from across the field, ease the births of lambs whose mothers are in distress, make hay in wet weather, train a sheep dog.  The sheep farmers know the bloodlines of all the flocks in their neighborhoods, can recite the biographies of famous shepherds and explain the choices they made that insured the pre-eminence of their flocks; reading these passages I understood why we evolved the encyclopedic habits that people today put to work learning sports or music trivia. Rebanks has spent most of his life as a shepherd but still feels that older and wiser men know much more that he needs to learn before he can reach their level.

But besides the body and the memory shepherding for Rebanks involves something else: his soul. He loves the work. It makes him feel useful, knowledgeable, connected to the past, part of a community, all the things that so many moderns miss. As a boy he loved shepherding and skipped school every chance he got to stay home and help his father or grandfather on the farm, and his daughters love it just as much. This is work that involves whole families across the generations. It is also a very equal world, in which there are no real masters and every servant hopes one day to own or at least lease a farm of his own. Rebanks emphasizes that shepherds treat each other with a familiar respect, and that if anyone is treated with a greater deference it is because of his or her great knowledge of shepherding; money counts for little, formal education for nothing. The shepherds' world is, as Wordsworth wrote, a "perfect republic."

Don't get me wrong, I understand that this is a one-sided picture. Many people have fled the farming life for the cities, and not just because they couldn't make ends meet. These hard lives have driven many others to whiskey and an early grave. Some farm families are rough but ultimately loving, like Rebanks'; others are rife with violence or abuse.

But at least traditional farming has a side that is powerfully good. There is a reason why Rebanks' book has been a best-seller, but hardly anybody would read a book about bureaucracy. The lives of traditional shepherds are appealing to us, I believe, because they are much closer to the challenges we evolved to face. Much more like the lives we were meant to lead.

So if you ask me why so many Americans prefer early retirement or disability to paid labor, I answer: read James Rebanks. Take a close look at what truly compelling work looks like. And then measure how far the sort of jobs available to most Americans fall short of it. People are abandoning work not because they are lazy or lack moral fiber, but because the work they could get is soul-destroying: mindlessly routine labor under the strict eye of domineering bosses, completely lacking in community or tradition, leading to nothing that you can hold in your hand or be proud that you have done. When people can get work worth doing, they throw themselves into it, and it makes them proud. The problem is the work, not the people.
Posted by John at 4:47 PM

"The lives of traditional shepherds are appealing to us, I believe, because they are much closer to the challenges we evolved to face. Much more like the lives we were meant to lead."

First, evolution has no intent. It cannot possibly have intent, because it is an unfeeling and indiscriminate force of nature. Our evolutionary path does not convey meaning on our lives, and we were never "meant" to be anything because of how we evolved. Our development was random and arbitrary, and cannot be said to "mean" anything, or to have been intented in any way.

Second, we did not evolve to become shepherds. Evolution shaped us to be hunters and gatherers - not to practice animal husbandry (nor to practice farming, a behavior similarly romanticized by later generations as "pastoral", "natural", and how we were "meant" to live.)

If you want to speak poetically and argue that evolution "meant" for us to be a certain way, then we are "meant" to be nomads constantly hunting and following wild game, and foraging wild plants.

Simply put, you can't have any degree of civilization and still live as evolution "intended" us to.