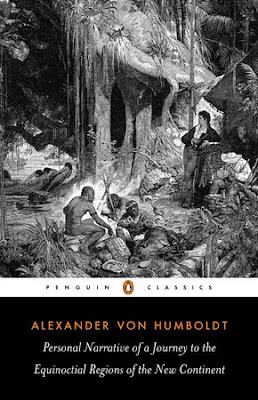 In his time, Alexander von Humboldt (1769-1859) was the most famous scientist in the world. Explorer, biologist, geologist, climatologist, anthropologist, linguist, systemitizer and popularizer, Humboldt was a towering figure both within the scientific community and among the reading public. I have read that there are more places in the world named after Humboldt than any other modern person.

Humboldt vaulted to prominence because of a scientific expedition he made to South America in 1799 to 1804. This great endeavor led to more than twenty volumes of scientific publications, a long book on the politics of Spain's new world colonies that inspired Bolivar and other Latin revolutionaries, and also a best-selling memoir, Personal Narrative of a Journey to the Equinoctial Regions of the New Continent. You can read an abridged version of this narrative in a fine Penguin edition, and I have just finished it. It is amazing. Humboldt is a remarkably sympathetic narrator, his eyes open to everything, his heart open to every person he meets. And he saw amazing things: earthquakes, volcanoes, rain forests, jaguars, anacondas, dozens of different Indian communities, caves full of Indian skeletons. Shamans taught him how to make curare and other poisons, and treated his wounds with their plant-based medicines. He encountered an old parrot who spoke volubly but could not be understood, because he only knew the language of a tribe that had vanished years before.

He also wrote powerfully about the travails of the expedition: dreadful heat, weeks of rain, fearsome droughts, meals of rancid cassava studded with bitter ants, injuries, illness, and especially insects: clouds of mosquitoes so thick that no work could be done or food prepared, so many bites that their whole bodies swelled up. But rather than drone on about my own reactions, let me just pass on one of Humboldt's many amazing stories. The expedition is in what is now southern Venezuela, and Humboldt wishes to study electric eels:


Impatient of waiting, and having only obtained uncertain results from a living eel brought to us, we went to the Cano de Bera to experiment on the water's edge. Early in the morning on the 19th of March we left for the little village of Rastro be Abaxo: from there Indians led us to a stream, which in the dry season forms a muddy pond surrounded by trees, clusia, amyris, and mimosa with fragrant flowers. Fishing eels with nets is very difficult because of the extreme agility with which they dive into the mud, like snakes. We did not want to use barbasco, made with roods of Piscidia erythrina, Jacquinia armillaris, and other species of phyllanthus which, thrown into the pond, numbs fish. This would have weakened the eel. The Indians decided to fish with their horses, embarbascar con caballos. It was hard to imagine what they meant by this; but soon we saw our guides returning from the savannah with a troop of about thirty wild horses and mules. They forced them into the water.

The extraordinary noise made by the stamping of the horses made the fish jump out of the mud and attack. These, livid, yellow eels, like great water snakes, swim on the water's surface and squeeze under the bellies of the horses and mules. A fight between such different animals is a picturesque scene. With harpoons and long pointed reeds the Indians tightly circled the pond; some climbed trees whose branches hung over the water's surface. Screaming and prodding with their reeds they stopped the horses leaving the pond. The eels, dazed by the noise, defended themselves with their electrical charges. For a while it seemed they might win. Several horses collapsed from the shocked on their most vital organs, and slipped under the water. Others, panting, their manes erect, their eyes anguished, stood up and tried to escape the storm surprising them in the water. They were pushed by the Indians, but a few managed to escape to the bank, stumbling at each step, falling on to the sand exhausted and numbed from the electric shocks.

In less than two minutes two horses had drowned. The eels is about 5 feet long and presses all its length along the belly of the horse, giving it electric shocks. They attack the heart, intestines and the plexus coeliacus of the abdominal nerves. It is obvious that the shock felt by the horse is worse than that felt by a man touched on one small part. But the horses were probably not killed, just stunned. They drowned because they could not escape from the other horses and eels.

We were sure the fishing would end with the death of all the animals used. But gradually the violence of the unequal combat died down, and the tired eels dispersed. They need a long rest and plenty of food to recuperate the lost galvanic energy. The mules and horses seemed less frightened; their manes did not stand on end, and their eyes seemed less terrified. The eels timidly approached the shore of the marshy pond where we fished them with harpoons tied to long strings. While the string is dry the Indians do not feel any shocks. In a few minutes we had five huge eels, only slightly wounded.

Humboldt saw many such bizarre scenes and described them all with the same verve. I have read few more rewarding books.
Posted by John at 10:01 PM

"He encountered an old parrot who spoke volubly but could not be understood, because he only knew the language of a tribe that had vanished years before." What a marvellous resonant image! It put me in mind of a book by Arthur Koestler (name of which I cannot recall, sorry) where a prisoner learns Serbo-Croat from a fellow who describes to him the beauties of Belgrade and its seven hills, etc. The prisoner becomes fluent in SC and even after his cellmate dies he develops a facility with the language writing works of great poetry and beauty. On his release, he cannot live in his old home - such is his love of his new culture. He travels to Belgrade - which he does not recognise as the city he 'knew' and where no-one can understand him. His 'Serbo-Croat' is merely gobbledegook, his poetry is... nothing.