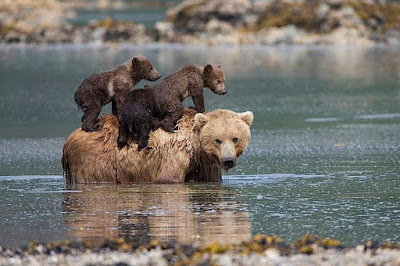 Male brown bears like to kill bear cubs. It''s just grim evolutionary logic, since a female who loses her cubs may come into heat again, giving the male a mating opportunity. Mother bears know this, and they try to protect their cubs from males. A recent study in Quebec showed that some females are doing this by hanging around human settlements. The male bears are afraid of people, so they are more likely to leave the females alone.


But male bears are often leery of getting too close to human civilizations, which may provide the females an opportunity. Leclerc and his coauthors looked at extreme cases from 2005-2012 in which all of a bear’s cubs survived, or all of them were killed, since males intent on guerrilla family-forming will usually wipe out the whole litter if they can.

GPS data and spot-checking from the ground and helicopters to see whether cubs had survived the mating season showed that the most successful mothers were the ones that hung out more often relatively closer to humans, while those that often avoided human infrastructure were the ones that lost cubs.

As one Norwegian biologist put it:


In a way it's the best of two evils to go close to humans. The moment that mating season is over and when the chance of her cubs being killed by a male is over, she instantly switches back to avoiding humans. It’s very much that she takes the opportunity of this time window when the humans are perceived as less threat than the males that come and victimize her.

This is a common strategy of prey species around the world, who sometimes hang out around livestock because they know humans are working hard to keep predators away from their flocks.
Posted by John at 8:55 AM