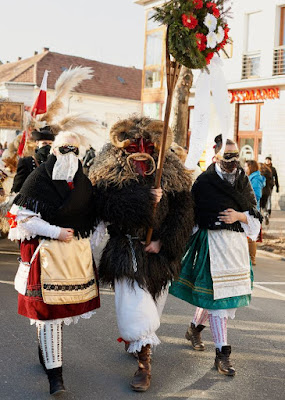 Great article and set of photographs in the Times on the Hungarian festival of Busojaras, in which people dress up as demons to scare away winter:


The festival is rooted in the local Sokci community, an ethnographic group of mostly Croatian Slavs. According to legend, when the Ottomans occupied Hungary in the 16th century, the townspeople fled to the nearby marshlands where they met an old Sokci man who promised that they’d soon return to their homes. He told them to carve masks and prepare for battle. When the masked, sheepskin-clad townspeople reappeared in the midst of a winter storm, the Ottomans thought they were facing demons and fled before sunrise. As a result, Busojaras has come to symbolize a way to scare away winter itself — and it’s no longer just Sokci people who participate. Now, every February, tourists flood Mohacs to take in the spectacle. 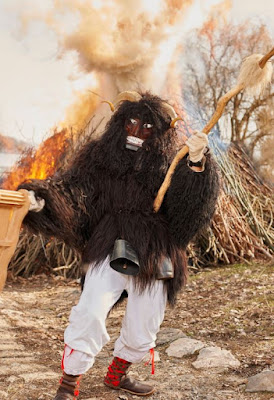 Busos wear masks carved out of willow and dyed with animal blood; no two are the same. Groups made up of family and friends get together during the year to plan, and, during the festivities, eat, prep, costume and process together. The town council supports the festival by providing Buso groups with funding to assemble their elaborate costumes. “As a Buso, you cannot be recognizable,” said Aron Rozsahegyi, who has been part of the group since 1992. “Fully dressed, you feel this sense of freedom and the force of history rising within you.” Oliver Rozsahegyi, the group’s founder, works at a local auto repair shop, but he also carves masks in his free time. “I find that you can tell who has carved a certain mask because it always looks a little bit like the carver,” he said. (His own mask looks vaguely like him.)

Besides looking wild, the Busos also act wild, shouting and banging on things to make as much noise as possible, harassing spectators, and (a recent favorite) mocking anyone trying to take a selfie. 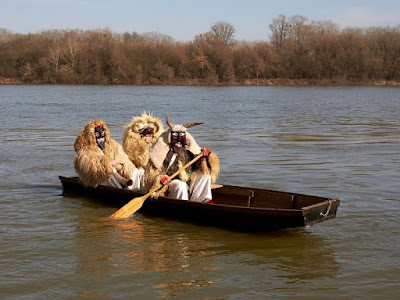 Busos crossing the Danube, part of the Hungarian ritual. 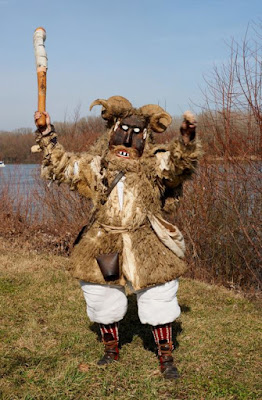 I love these traditions. Yes, they are now put on for tourists. But that does not mean the ancient meanings are lost. If you ask me what that meaning is, I answer that it has nothing to do with Hungarian history or the history of any particular place, and little with God or the gods. It is partly about the seasons, but more about what people feel when they mask their faces and dress up as demonic beings. This is from Charles Fréger's book on the whole European tradition of dressing up as Beast Men for Carnival or the New Year:

The festival is about recognizing the different sorts of being we feel within in us, and that we see in the world around us: cruelty and kindness, hate and love, winter and summer. It is about experiencing, for a little while, a different identity and a different reality, one more tied to ancient archetypes than to the drab concerns of our daily lives.
Posted by John at 7:52 AM