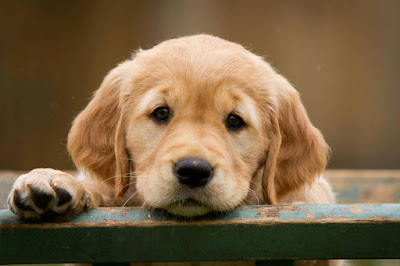 What a world. Consider the story of Dawn Sabins, who bought a golden retriever puppy for $2,400 and then ended up paying a lot more than that:


The Sabins had bought their new dog, Tucker, with financing offered at the pet store through a company called Wags Lending, which assigned the contract to an Oceanside, California-based firm that collects on consumer debt. But when Dawn tracked down a customer service rep at that firm, Monterey Financial Services Inc., she learned she didn’t own the dog after all.

Without quite realizing it, the Sabins had agreed to make 34 monthly lease payments of $165.06, after which they had the right to buy the dog for about two months’ rent. Miss a payment, and the lender could take back the dog. If Tucker ran away or chased the proverbial fire truck all the way to doggy heaven, the Sabins would be on the hook for an early repayment charge. If they saw the lease through to the end, they would have paid the equivalent of more than 70 percent in annualized interest—nearly twice what most credit card lenders charge.

There's just so much in this story. First, why are middle class people paying $2,400 for purebread pet store puppies? And then there's this business of pet rental, which is purely a dodge because they can extract a lot more from buyers under rent-to-own agreements than they could legally charge in interest on a loan. The owner of Wags Lending is (of course) a fan of Ayn Rand and says (of course) that he is "living in a Postmodern culture while maintaining my old American West roots and Christian values." His business strategy? "We like niches where we’re dealing with emotional borrowers."

As Matt Levine says, this story should be


engraved on an obelisk so that, thousands of years in the future, when people or aliens find the remains of our civilization, they'll understand what we were all about.

The next time you feel like adopting a pet for your family, please visit your local animal shelter or pound. Puppy mills are cruel and inhumane, and they victimize both the animals themselves and the people who seek to buy them. This is especially true of mills for popular breeds like retrievers, which are notorious for their unethical behavior and reckless breeding practices.

Also, please realize that mixed breed animals are every bit as good as supposedly "purebred" animals. Unless you are specifically seeking a working dog to help you manage livestock, assist in hunting, sniff out contraband, or perform some other highly specialized task difficult or impossible for humans to perform, there is no logical or ethical need for an animal to have been bred to possess certain physical characteristics.

You should also note that the worst genetic health risks carried by many popular breeds are the direct product of inbreeding carried out by unscrupulous breeders. As a result, many mixed breed animals are actually more likely to be healthy and active throughout their lifespans than their supposedly "purebred" counterparts.

What's more, animals in shelters and pounds already need homes, and there are already too many animals in the world for people to take care of. Puppy mills only add to the problem, purposefully breeding more dogs than they can possibly sell and euthanizing the excess, or sometimes even just releasing them to become strays which society at large then has to deal with. If people simply refused to buy animals from puppy mills, these companies would stop making money and be forced to close up shop, reducing the number of homeless animals and preventing industrial scale eugenics, exploitation, and cruelty.

Please, for the sake of good people and good animals everywhere - adopt from a shelter or a pound. The animal you save will be forever grateful.

Verloren--I agree on the whole with what you've written, but I do think there is an element of "responsible breeding" that you are ignoring.

A responsible breeder will breed for temperament (and health), and, yes, genetics are such that these traits *can* be followed and traced. It's easier to see this in successful sheep breeding, maybe, where you can, in a few generations, create a sheep that has great wool, or perhaps provide great milk, and also link an appropriate temperament (wild for roaming wool-sheep, mild for need-lots-of-handling milk sheep). There is a reason people buy golden retrievers for their children and doberman pinschers to roam the perimeter of their property (two breeds I am not fond of, but which make good examples).

Drat. I'm getting interrupted here so can't fill out this thought. I'm just saying--there is a time and place for buying a full-breed animal. Especially if you are an inexperienced owner (sadly, the type most likely to be taken in by an unscrupulous dealer) and wouldn't be able to look at a series of cages full of barking, upset dogs, and be able to figure out for yourself which one of them would fit best with your own life circumstances.

Right now you’re probably reading this message because you’re desperate to finally learn how to not only train your dog quickly and effectively, but you also don’t want to have to spend a huge chunk of cash on professional dog trainers or read yet another dog training book that doesn’t get you results.

Don’t worry, you’re NOT alone in your frustration!

Find out here: How To Teach A Dog?