Geography and Politics in America 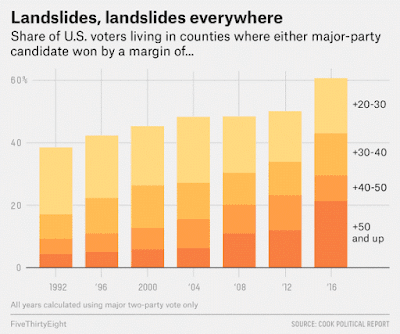 If you think you don't know anybody who voted for the other candidate, you're not alone. America is more and more divided into neighborhoods with one overwhelming political preference:


Of the nation’s 3,113 counties (or county equivalents), just 303 were decided by single-digit margins — less than 10 percent. In contrast, 1,096 counties fit that description in 1992, even though that election featured a wider national spread. During the same period, the number of extreme landslide counties — those decided by margins exceeding 50 percentage points — exploded from 93 to 1,196, or over a third of the nation’s counties.

That's somewhat misleading because it treats all counties the same from tiny to huge, but as the chart shows the same trend is apparent when you consider the number of people who live in landslide counties.

One reason for this is that American politics is overwhelmingly about culture, not economics or really any other other particular issue, and one important cultural divide in America is between cities and rural areas. What is weirder to me is that many suburbs have also taken on very strong political tones; viz., Montgomery County Maryland  is overwhelmingly Democratic, while Orange County California is Republican. And then there is the way whole cities have taken on partisan styles, like Austin being the most liberal city in Texas. What explains those things I have no idea.
Posted by John at 11:27 AM

Politics today in America is mostly explained by the marriage gap.

BTW, Orange County isn't that Republican anymore; it went for Hillary by more than New Mexico did. Partly due to changes in the White vote, partly due to the growing Hispanic population.