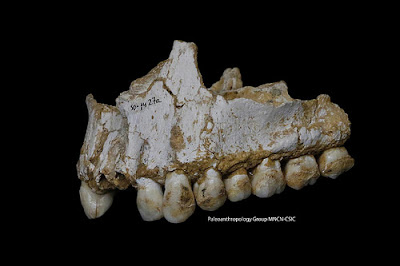 Scientists have analyzed the dental plaque of Neanderthals, and they think that from the DNA in the plaque they have learned something about what these ancient people ate. As usual I am suspending judgment until we have more data, but I wanted to pass on what I think is the most interesting finding:


We found that the Neandertals from Spy Cave consumed woolly rhinoceros and European wild sheep, supplemented with wild mushrooms. Those from El Sidrón Cave on the other hand showed no evidence for meat consumption, but appeared instead to have a largely vegetarian diet.

So there you have it. Not only was there no single "paleo" diet, there was much diversity in eating habits between these two groups of Neanderthals. Note that dietary plaque doesn't represent just the last meal, but builds up over years.
Posted by John at 6:56 PM

Of course there was never a single unified diet. That's an utterly absurd notion.

And I'm quite willing to wager that if you look at "paleo diets" from islands and coastal areas without much in the way of either edible plants or huntable animals, you'll find they ate - surprise, surprise! - a whole lot of fish. Astounding to think, I'm sure, but the logi clearly points us in that direction.

Seriously, even later societies with the expanded options made available by agricultre and trade were still reliant on what they could get their hands on or what the local environment could support. Why did the Romans grow a lot of wheat? Because that's what they could grow in most places. They did also have access to rice, but that couldn't be grown locally and was imported from Egypt and the Middle East, and was only available because of trade and the ability to dry grain for storage and transport. And they certainly didn't have access to potatoes or to corn, because those were completely unknown in the Old World, even though it turned out they could be grown there.