Globalization, Bombay, and the US Civil War 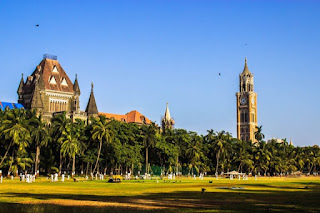 Globalization is not a new phenomenon; after all nothing happening now is as consequential as the wonders and horrors unleashed by the European discovery of the New World. Globalization's first wave gave us the mostly disease-inflicted destruction of the American Indian population, the trans-Atlantic slave trade, the growing of potatoes in Europe and maize in Africa, the spread of hot peppers around the world, the United States, and so many other things it is hard to list them all.

In the nineteenth century steamships, railroads and the telegraph launched a new wave of globalization. Because of this new interconnectedness, the US Civil War led to a great boom in Bombay (now Mumbai), India, the effects of which are still very much with us. Tyler Cowen explains:


The structure of Bombay is intimately tied to the history of the United States in ways that illustrate the long arc of globalization. At the heart of Bombay, around the Oval Maidan, on which cricket games are often played, one can see many of Bombay’s iconic Victorian buildings including the University of Bombay, the Bombay High Court and the Rajabai clock tower. These buildings and many others were begun in the late 1850s and 1860s during the Bombay boom–a boom brought about by America’s Civil War.

The U.S. South began the civil war by embargoing cotton exports and burning 2.5 million bales of cotton in order to create a shortage and bend the world to its will. The embargo didn’t lead to Britain’s support, however, and by the time the South realized it had shot itself in the foot the North imposed its own blockade. Cotton prices skyrocketed–between 1860 and 1863-1864 prices rose by a factor of four on average and at times by a factor of 10. As cotton exports from the United States fell, exports from Persia, Egypt and especially India boomed. As Sven Beckert put it: "The bombardment of Fort Sumter…announced that India’s hour had come."

In India farm land was switched over to cotton, railroads and telegraphs were built uniting cotton producing areas in Bihar with cotton’s chief trading center and port, Bombay. Production and exports boomed. Vast fortunes were made from the cotton trade and the speculation it engendered; fortunes that were plowed into universities, libraries and many of the great buildings that mark Mumbai today. In fact, the Back Bay Reclamation project began at this time so some of the very ground that Mumbai sits upon has its roots in the American Civil War.

That Britain was able to ride out the war and was not forced to intervene as the South hoped also had much to do with India: the boom in Indian cotton production meant that by 1864 the cotton mills were humming again.

Cowen doesn't mention this, but I would imagine that the Indian cotton boom is one reason why the South was so slow to recover from the war: Indian competition kept the price of cotton low, and British financiers who wanted to invest in cotton could choose to do so in India instead of North America, wounding the biggest part of the South's economy.
Posted by John at 12:34 PM

Random aside, I've always found it weirdly serendipitous that the environments in which cotton grows best are the sorts of environments where you would want to wear cotton clothing over pretty much anything else.

With wool it makes a certain degree of sense - you would expect animals like sheep that live in cold climates would evolve to have thick, warm fleece.

But cotton plants don't rely on the fibrous coverings of their seeds to cope with the warmth and humidity. The primary purpose of cotton bolls is to aid in seed dispersal, similar to a dandelion. How curious, then, that unlike dandelions and other wind-dispersed plants, they would happen to develop a fiber with strong tensile strength which is able to be spun into yarn, and that the resulting cloth would be soft and breathable, rather than coarse and smothering like many other natural fibres.