The small (3 by 5.5 miles) island of Eigg on the Scottish Hebrides has a long history of dismal clan violence. As on the nearby and much larger island of Skye, the main combatants were the clans of MacLeod and MacDonald. (Above, view of Eigg from Muck) Wikipedia:


According to Clanranald tradition, in 1577 a party of MacLeods staying on the island became too amorous and caused trouble with the local girls. They were subsequently rounded up, bound and cast adrift in the Minch but were rescued by some clansmen. A party of MacLeods subsequently landed on Eigg with revenge in mind. Their approach had been spotted by the islanders who had hidden in a secret cave called the Cave of Frances (Scottish Gaelic: Uamh Fhraing) located on the south coast. The entrance to this cave was tiny and covered by moss, undergrowth and a small waterfall. After a thorough but fruitless search lasting for three to five days, the MacLeods set sail again but a MacDonald carelessly climbed onto a promontory to watch their departure and was spotted. The MacLeods returned and were able to follow his footprints back to the cave. They then rerouted the source of the water, piled thatch and roof timbers at the cave entrance and set fire to it at the same time damping the flames so that the cave was filled with smoke thereby asphyxiating everyone inside either by smoke inhalation or heat and oxygen deprivation. Three hundred and ninety-five people died in the cave, the whole population of the island bar one old lady who had not sought refuge there. There are however some difficulties with this tale and in later times a minister of Eigg stated "the less I enquired into its history ... the more I was likely to feel I knew something about it." Nonetheless, human remains in the cave were reported by Boswell in 1773, by Sir Walter Scott in 1814 and Hugh Miller in 1845. By 1854, they had been removed and buried elsewhere. 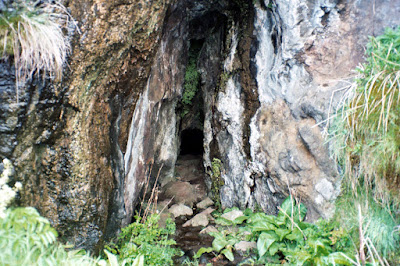 The BBC adds the helpful detail that the attackers followed the lone man's footsteps to the cave because it was snowing. Their source, a local taleteller, adds this:

Now there is a new report of human bones from the cave. They were reported last October by some tourists who stumbled on them and notified the police. The police handed them over to archaeologists who had them radiocarbon dated. The resulting date is 1430 to 1620 CE, which gives a midpoint of 1525. So these might be more bones from the famous massacre. 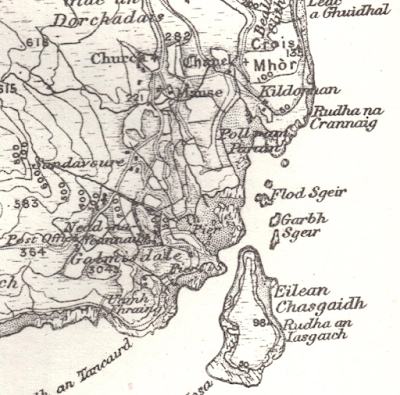 Whether or not one accepts the oral legend of the great massacre, it certainly looks like some substantial group of people were murdered in the cave.
Posted by John at 3:50 PM