The Mystery of the Scablands 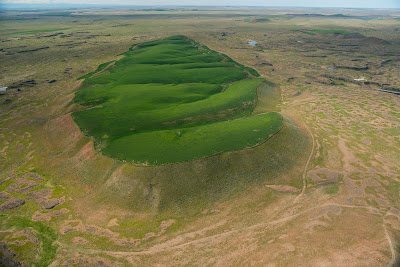 National Geographic is running a good story by Glen Hodges on the mysterious geology of the Columbia Plateau in eastern Washington state. In the midst of this desert are what look like the remnants of great floods: huge gravel bars, mighty erosion channels, things that look like the potholes that form in the bottom of rivers but are ten times the size. A feature known as Dry Falls looks for all the world like a gigantic waterfall, ten times the size of Niagra, except that there is no river anywhere in sight. Geologists call the region the Channeled Scablands. 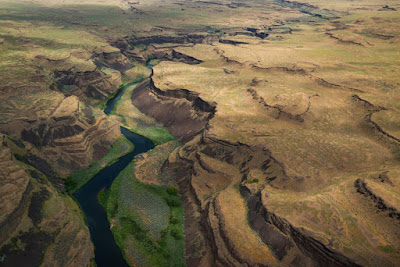 The first to offer an explanation of this landscape was local boy turned legendary geologist Harley Bretz:


In 1909, the Seattle teacher visited the University of Washington to see the U.S. Geological Survey’s new topographic map of the Quincy Basin, a large area on the west side of the Columbia Plateau. He was 27, with no formal training in geology, but when he looked at the map, he noticed a striking feature: a huge cataract (much like Dry Falls) on the western edge of the basin, a place where water appeared to spill out of the basin and into the Columbia River, gouging a canyon several hundred feet deep. The falls would have been bigger than Niagara, but there was no apparent source of water for them—no signs whatsoever of a river leading to the cataract.

Bretz asked faculty in the department about the feature, called Potholes Coulee, but they had no answers for him. Nor could they explain many of the other unusual features of the region. That’s when, as legend has it, Bretz decided to become a geologist. 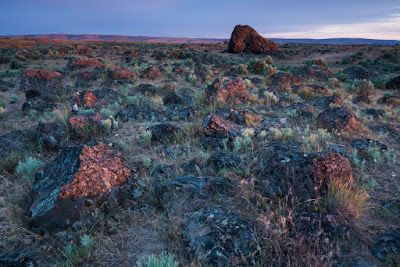 The Ephrata Fan, a flood-deposited gravel bar containing boulders the size of houses. 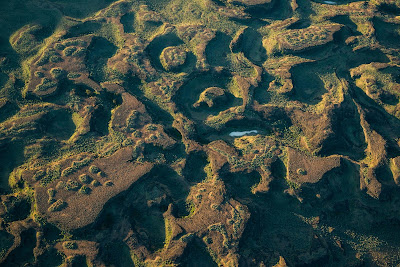 Bretz realized that this landscape must have been created by gigantic floods. But when he tried to convince other geologists, nobody believed him. Geology was in the grip of an orthodoxy called Uniformitarianism, which held that the earth has always been shaped by the everyday forces we can see around us. Bretz's giant floods sounded to rigorous scientists like something from the Bible-based science of the 1700s, and they refused to believe him. 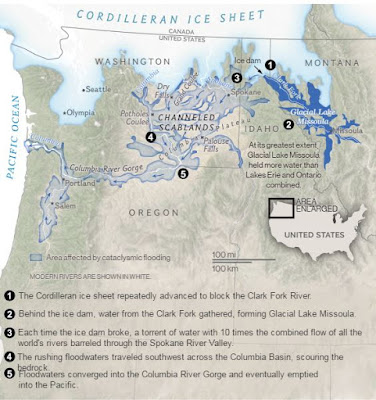 But Bretz turned out to be right. Other geologists eventually figured out that the great glaciers of the last Ice Age had created a huge lake in the Rockies, now known as Lake Missoula. That lake filled up and emptied several times as the glaciers advanced and retreated. And when it emptied, the flow briefly exceeded the flow of all the world's rivers combined. The result was the water-scoured terrain of the Scablands.
Posted by John at 6:32 AM

I've been to parts of Idaho and seen the rolling fields full of "grape gravel" boulders strewn willy nilly about.

Standing at the feet of these colossal rocks and trying to imagine the amount of flowing water that would be required to move just one, let alone the hundreds of others around it, and to fill and flood through the vast emptiness of the landscape, was absolutely mind boggling.