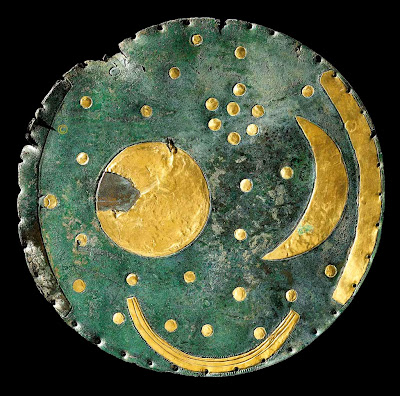 One of the weirdest things to ever be excavated from an archaeological site is this bronze disk. Found in Germany in about 1999, it measures 30 centimeters (about a foot) across. It appeared on the antiquities market in rather mysterious circumstances, and since it does not really resemble any other object ever found in Europe, many people (including me) suspected it was a fraud. But the discoverers came forward with a plausible story about how and where it was found, on a low hill near the town of Nebra that has turned out to be a center of prehistoric astronomy, and they also produced two Bronze Age swords they said were found with it. One of these was radiocarbon dated to 1600 BC, which matches their style. The disk was seized by the government of Saxony-Anhalt and handed over to experts who examined it with the most minute and exacting German Wissenschaft. They verified that it was made in the Bronze Age, and also discovered many other things about it. It is one of the most fascinating objects in the world, and discussion of what it was and how it was used will go on for decades. 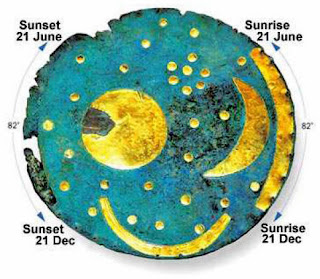 It was made in three stages. In the first, it bore only the small dots, the sun, and the moon, rendered in gold foil. The small dots are almost certainly stars, and the group of seven must be the Pleiades. Then the two gold arcs on the rim (one is missing) were added. These measure about 82 degrees, which is the angle between the midwinter and midsummer sunrises at the latitude of Nebra. Then the arc was added to the bottom; this has been interpreted as a solar boat, a rainbow, and the Milky Way, and it does not really seem to be related to the disk's function. The holes around the edge were punched still later, possibly when its original use had been forgotten.

What was that function? Here is where things get interesting. The sort of fringe elements who spend their spare time drawing solar alignments have had a field day with the disk, but I don't want to dismiss their speculations. After all, this is a unique object, and if we know anything about the European Bronze Age it's that the people were kind of mad for religious astronomy.

One interpretation is that the disk is a calculator for determining when to add the extra, intercalary month to the year. Ancient peoples had two main ways of measuring time, by solar years and lunar months. Twelve lunar months is only 354 days, so about every third year an extra month had to be added to the calendar. (Representing as it did the mismatch between the solar and lunar calendars and therefore the imperfection of the universe, this month was considered unlucky by many, and this is why 13 is an unlucky number.) Babylonian astronomical tablets describe a method of determining when to add the extra month that depends on the position of the sun, the moon, and the Pleiades. I have my doubts as whether the disk is rendered with enough precision to actually calculate anything, but it certainly seems to represent the elements used in the calculation. 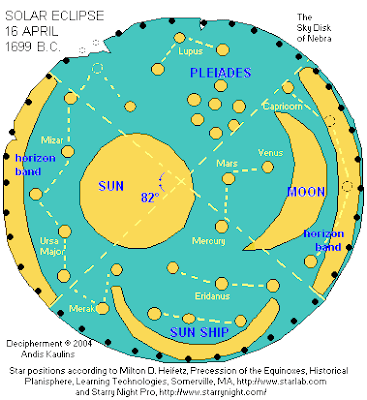 Another interpretation is that it encodes the exact position of stars and planets at a solar eclipse of 1699 BC (see above). And no doubt there will be others, given the strangeness of this disk, and the well documented Bronze Age obsession with the sky.
Posted by John at 7:38 AM