A Two-Horned Approach to Bringing Back the Aurochs 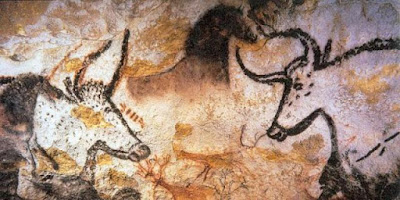 The aurochs, the European wild cattle that appears in so many cave paintings, survived much longer than most great beasts of the Ice Age; the last one died in Poland in 1627. In the early Middle Ages, kings hunted them and drank mead from their horns.

In Europe there is a movement that people call "Rewilding," dedicated to turning what was once settled country back into wilderness. After all people are leaving big swathes of the European countryside in such great numbers that wolves and black bears are coming back to some depopulated areas on their own. But for some, the animals likely to come back by themselves are not enough, and they mourn for the vanished beasts that once walked these forests. First on the list to bring back is the aurochs.

The effort to bring back the aurochs combines what we might call the traditional and high-tech approaches. The traditional approach involves cross-breeding modern cattle that seem to have aurochs DNA to create a creature that looks more like the wild ancestor:


Since 2009, European science teams have been breeding cattle which still carry aurochs DNA. Two programmes are attempting to revive a version of the aurochs through breeding.

One is Operation Taurus, which has selectively bred 300 calves with auroch DNA via a process called back-breeding. They select breeds of cattle which have certain aurochs characteristics and each generation of calves gets closer to the original aurochs in appearance, behaviour and genetic makeup.

There are several breeds of cattle the scientists use which have characteristics closest to the aurochs, including the Maremmana from Italy and Podolica and Busha breed from the Balkans.

"They have the highest percentage of aurochs genetic material," Professor Donato Matassino from the operation told the Telegraph."I don't think we'll ever be able to create an animal that is 100% like the aurochs, but we can get very close."

But of course there is a way to get back to 100% aurochs DNA: cloning. We have all the aurochs DNA we could ever want, since there are horns aplenty in European museums and even a couple of stuffed specimens. So once we have a beast that is 80% aurochs, it ought to be simple to clone that DNA into one of its eggs and get a 100% aurochs calf. Its mother ought to recognize and be capable of caring for it, too.

Since we know that aurochs survived fine in European forest of the Middle Ages until they were hunted to extinction, that revived beast ought to thrive in our world. I can't think of any reason not to do this, and I fully expect it to happen in my children's lifetimes.
Posted by John at 9:08 AM

I also look forward to the return to the elks with no knees (described in the same passage of Caesar) to the forests of Europe.