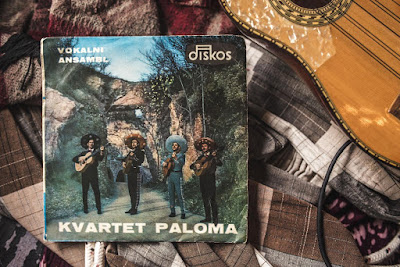 After World War II, the Tito regime in Yugoslavia banned almost all western music and film as decadent. Then in 1949 they fell out with the Soviets and banned Russian entertainment, too. With few other options, they turned to Mexico and imported piles of both Mexican music and Mexican film. And this led to a little boom in the local production of Mariachi music that lasted into the 1960s:


Explore the many shelves in Belgrade’s Yugovinyl store today and you can quickly amass a pile of ‘Yu-Mex’ records. The faded photographs on their sleeves depict men with names like Ljubomir Milić and Đorđe Masalović, proudly wearing sombreros and glittering charro suits. On the turntable, these records sound straight out of Guadalajara, except that the lyrics are in Serbo-Croat. For the Mexicans that ruled the radios here were, in fact, Yugoslav.

Today this music is making a little nostalgic comeback. Many Yugloslav Mariachi songs have been posted to Youtube, and you can hear Mariachi bands on the Belgrade bar circuit.

Amazing. And I nominate this for the strangest sentence you are likely to read today: