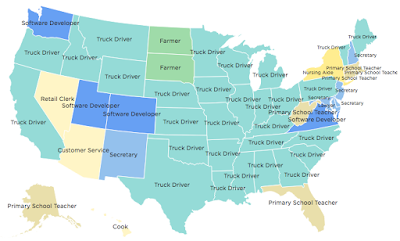 I was just reading an article about changes in the global economy, and it quotes WTO Director General Roberto Azevedo as saying that the real issue is not globalization but automation. Only two out of ten lost jobs in rich nations are lost to trade, he says; eight out of ten are lost to new technology. And then this:

So there it is again. There's nothing we can do about the way the world is changing. We cannot fight it, cannot even be against it. We just have to be prepared.

Which is how, if you ask me, we ended up with President-elect Donald J. Trump. When everyone in the establishment says that there's nothing we can do for millions of ordinary working people and the places they live, and we just have to take our lumps and move on, and only a demagogic madman says that there actually are ways we can help ordinary people keep the things they want to keep, then people vote for the demagogic madman.

I have been polling my friends about the question of banning self-driving trucks – admittedly in the context of Trump's victory – and so far every person I have talked to, but one, has either agreed that we should or at least suggested we look into it. All but one person I know thinks it would be awful to let automation wipe out 4 million working class jobs. The one exception is my 19-year-old son who passionately hates the very idea of work and longs for a world in which all labor is done by robots and we all sit around collecting universal basic income and playing video games.

On the other hand, some truckers are not on board with this plan. I've read about twenty articles on the future of trucking this morning, and I have encountered several opinions like this one:


The idea that we’ll go to automated trucks and then drivers will sleep while the truck drives — not a chance in hell. I would never do that. It would make the job not worth doing. Once you’re only paying a guy to drive the final miles into a city, we’re certainly not going to get a raise for that.

The issue is not just having a job, because thousands of people would resist taking a job that has been created by a government program to give people work. This is especially true of men in the rural areas and small towns from which most truck drivers come. Truck drivers enjoy thinking that the economy depends on their skills and efforts, and they don't want to feel like useless fifth wheels. Plus, as this driver says, the mere existence of technology that can replace truck drivers will put downward pressure on drivers' wages.

So as we were just discussing in another context, a ban on self-driving trucks might be another idea that seems good at first but turns out on close examination to be unworkable. But where are the workable ideas? And what can we do about a future in which software takes over more and more jobs?

Map at the top, from  NPR, shows the most common job in each state.
Posted by John at 11:11 AM

"I have been polling my friends about the question of banning self-driving trucks – admittedly in the context of Trump's victory – and so far every person I have talked to, but one, has either agreed that we should or at least suggested we look into it."

The railroads put countless people out of work when they arrived. But what were we going to do? Ban a cheaper, faster, more economical form of transportation that was revolutionizing our economy and society? Just to protect jobs?

The automobile ruined nearly everyone who worked in any capacity with horses, which until the 20th century was a massive proportion of the population, since they were the backbone of our transportation systems (aside from rail). But horses were more expensive, slower, required more care and downtime, and couldn't pull nearly as much weight as the new machines could. Should we have banned automobiles to protect the massive horse industry and those who made their livlihoods in it?

Newspapers are struggling in the face of modern online communications. What ought we do there? Ban the internet? Tell people like yourself you can no longer operate this website, because we need to protect the jobs of journalists and professional commentators, and your amateur, unpaid content is a threat to their vocation?

Look at the Soviets who clamoured for banned superior Western goods - clothing, vehicles, home appliances, and everything else. Look at Prohibition in 1920s America, or Sakoku Law in Edo Japan. Look at Colonial Era European empires, torn apart by republican revolution and rebellion. Again and again and again, history shows us that burying your head in the sand and clinging to the past is senseless and destructive in the face of a superior new technology or social system.

Self driving cars are moving ever closer to maturity, and freight trucks will be some of the first to actually fully get there. These trucks will make hauling freight safer, faster, cheaper, and more efficient than ever before - making them the flatly superior option. They will be the horseless carriage of our time. Can any sane person honestly believe banning them is even remotely feasible, much less the right course of action?

But what will you say to the 4 million people thrown out of work?

I will say what I've always said. We need to be giving government assistance to workers whose vocations become obsolete.

We should give them things like tax breaks, temporary government employment, retraining programs, and direct economic stimulus as needed. We should help them to transition as painlessly as possible to other jobs, both because it is the humane and moral choice, and because it protects our whole economy from the shock of a sudden market imbalance and subsequent chaotic and damaging correction.

Of course, those 4 million truck drivers might not necessarily lose their jobs. Automation is nowhere near fully matured. Replacing drivers with computers will soon make great economic sense, but it won't yet negate the need for also having a thinking human accompanying the vehicle on the road.

I've written previously about how there will still be a need for human operators to perform vital tasks that self driving vehicles simply will not be able to manage alone - performing routine maintenance and roadside repair, protecting the vehicle from tampering and theft, refueling the vehicle en route, taking manual control to deal with road hazards that require human decision making capability, loading and unloading cargo, et cetera.

Much like our modern aircraft still require pilots despite the existence of auto-pilot and advanced air traffic control technology, so too will self driving trucks require human operators who only rarely control the vehicle themselves, spending the bulk of their time doing very little, but whose presence is still unavoidably necessary to basic operations of the vehicle.

Instead of truck drivers, we will need truck technicians - at least for a decent while, likely several decades still. For now, as self driving vehicles are just coming into their own on the road, we can start transitioning existing drivers into this new job role. And that still leaves us with time to plan and prepare for the future, for when automation becomes more fully mature and we have to undergo yet another transition.