The Last Man in the Village 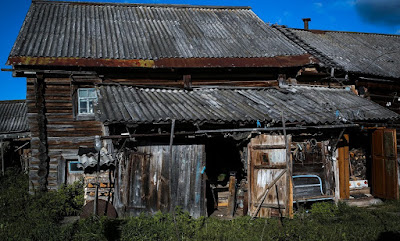 In Russia’s Kostroma region, a forested area northeast of Moscow, hundreds of villages have been abandoned, more than 200 in just the past six years. More than a third of the villages in the region are now empty, and hangers-on call this area The Desert. Russian journalists Liza Zhakova and Dima Zharov heard that in several villages just a single house is now occupied, and they set out to track these people down and find their stories. Some of them are farm families who just want to go on farming as they always have, and others are off-the-grid stalwarts like this man:


Lecha lives in the village of Spirdovo. A miner from Donbass, he says he feels most comfortable living far away from other people. When he’s not drinking in the neighboring village, Lecha picks berries and hunts for wildlife. His house is a mess.

“I arrived here when I was twenty-something. Closed my eyes, pointed at the map and hit Kostroma. I get a minimum pension payment, but it’s enough for me. We have groundwater, I don’t need to pay an electricity bill. All the money I get I spend on food and alcohol. If you want to earn something, pick berries or mushrooms, go fishing, set traps, do as you wish–no need to go anywhere. I don’t know why everyone is leaving! They had everything they needed there. Perestroika came, and everybody fled to the city.”

Which struck me as exactly the fantasy of many civilization-sick Americans. It is possible to live this way, if you don't mind spending Russian or Alaskan winters in a hut with a metal roof and holes in the walls.

And then it struck me as telling that none of the tens of thousands of people swarming out of Syria, Sudan, Eritrea, and other miserable places are trying to get to Russia, where is plenty of room for them.
Posted by John at 7:19 AM

"And then it struck me as telling that none of the tens of thousands of people swarming out of Syria, Sudan, Eritrea, and other miserable places are trying to get to Russia, where is plenty of room for them."

Aside from the legal, political, and economic issues of migrating to Russia, there's also just the physiological and psychological ones.

Moving from an incredibly dry, hot climate in the Levant to an incredibly cold, wet one in the Russian interior is a pretty shocking change, one which would be very hard for many people to adapt to. Diet is also completely different - you can't exactly prepare Levantine cuisine in a region where the primary ingredients of such dishes are rare and expensive luxuries that have to be imported in canned or presered forms. And then there's the ability to preserve their culture and identity, given how Russia is incredibly hostile to minorities of all kinds.

I'd wager a lot of these refugees would rather be dumped on uninhabited islands in the middle of the Pacific than be sent to Russia. The climate would at least be somewhat familiar, the available food would more agreeable than potatoes and borscht, and there wouldn't be a hostile local government, church, and native population to oppress and demonize them.

On the other hand lots of refugees are trying to get to Sweden.

Well, I did say "aside from the legal, political, and economic issues of migrating to Russia"...

The general Scandinavian lack of warm weather would presumably be largely made up for with some of the world's highest standards of living, best education systems, best medical systems, least corrupt governments, and most tolerant laws regarding minorities and human rights.

It also rather helps to be on the coast of the Atlantic and Baltic, rather than hundreds of miles into the subarctic Russian interior. And then there's inclusion in the EU, with all the benefits that brings (with the exception of Norway, who are nevertheless part of the single market, and also a NATO member). And as a side benefit of all this, it's a heck of a lot cheaper and easier to import Levantine foodstuffs to Scandinavia, even if they aren't going to be fresh.

So really, the only downside to seeking asylum in Sweden is the weather - which is far nicer than you'd likely expect, and certainly far balmier than it is nearer to the Urals.

"And then it struck me as telling that none of the tens of thousands of people swarming out of Syria, Sudan, Eritrea, and other miserable places are trying to get to Russia, where is plenty of room for them."

-Why? Not many are trying to get to Poland, either. When Russia does offer a step up for people against other alternatives, they try to go there. Look at Tajiks, Uzbeks, Turkmens. Lots of them are trying to get to Russia (or at least Kazahstan). Russia's welfare state, unlike Germany's and Sweden's, is not known for its generosity to migrants.