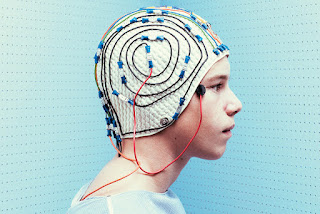 
The first true brain-to-brain communication in people could start next year, thanks to huge recent advances. . . . Researchers have managed to get two people, sitting in different rooms, to play a game of 20 questions on a computer. The participants transmitted “yes” or “no” answers, thanks to EEG caps that monitored brain activity, with a technique called transcranial magnetic stimulation triggering an electrical current in the other person’s brain.

So with lots of wiring and computers and who knows what else, researchers have managed to get one person to say "yes" or "no" to another.

Which we have been doing for at least 60,000 years using this arcane technology called "language."

I simply don't understand why people are so excited by the prospect of telepathy. Why not just say it? And no this won't help you read someone else's true thoughts unless 1) they are wearing exquisitely sensitive eeg caps and 2) you're only trying to extract a yes or no. Even that probably won't work if they're trying to fool you.
Posted by John at 9:05 PM

"I simply don't understand why people are so excited by the prospect of telepathy. Why not just say it?"

This isn't really about telepathy - this is about the old cyberpunk notion of directly interfacing computers and our minds. These people are trying to suss out how to create working cranial implants. They're trying to turn science fiction into fact.

For those not familiar with the concept, imagine if you had a little computer surgically installed into your skull, networked directly to your brain. Imagine if you could use it to control certain electronic devices mentally, with a mere thought.

For example, you wonder what time it is, and your implant can tell you directly inside your own mind. Or it can instead send the information to a visual display of some kind, such as an ocular implant, or even just a pair of smartglasses.

Now, you might be thinking, "Well that's useless - why not just wear a watch?". Well, you could send much more information than just the current time of day. You can access and use all sorts of data mentally.

With the aforementioned ocular implant or smartglasses (or with sufficiently advanced direct neural stimulus), you could project all sorts of visual displays into your field of vision (or directly into your mind), without that data being visible to others. You could have HUDs and visual overlays providing all sorts of information to you discretely. Watch television without bothering others by filling a room with noise and flickering light. Look at a map while driving without taking your eyes or attention off the road; receive visual warning indicators of remotely sensed traffic hazards; et cetera.

This just begins to scratch the surface of what could be possible. With a computer in your brain that you don't need hands or physical interfaces to access, you become able to do all sorts of things that just aren't practical otherwise.

For example, we could devise computational assistance implants, where your ability to compute numbers and data is boosted by a computer. Imagine instantly knowing the result of any equation you care to think about, without having to have a calculator on hand, without having to enter the data manually, without having to even understand all the arguments in play. Imagine being able to accurately gauge the weight of an object simply by picking it up and holding it in your hand. Imagine being able to calculate trajectories for things like hitting a golf ball or swinging a baseball bat, and having the correct arc to put it where you want it be overlaid into your vision.

Couple that with things like an implanted inertial speedometer and a suite of specialized sensors and you could always know your location, direction, speed, altitude, distance from certain points, et cetera. Anywhere you've been (or that you download navigational data for) you could have a perfect working knowledge of how to traverse. You could safely drive your car in thick fog or blindfolded, the same way modern aircraft routinely both fly and land safely in completely obscured conditions using only virtual guidance markers. You could wander blindly through a maze or into the wilderness and retrace your steps exactly to get back out. You could fall asleep in a passenger seat and know exactly the route your driver took once you woke up.

The possibilities are immense, and have fascinated science fiction writers for decades. And now we're taking the first steps toward making such fiction into reality. That's exciting.

So it seems I missed one particular detail - this experiment was completely noninvasive, allowing transcranial stimulation of the brain from external devices.

That's even better. Instead of having to install a device inside your skull surgically, you could just wear a small accessory on your head, avoiding issues of rejection or surgical complications, easing maintenance, et cetera.

Is it ultimately unnecessary to be able to control our electronics via mental commands? Perhaps. But one cannot deny the potential for increased efficiency and convenience.

Consider that you and I are currently communicating in an "unnecessary" manner - we could just as well be sending hand written letters to each other. But, of course, that would be much less efficient and convenient.

I'm not interested in reading people's minds - and a properly designed neural interface would actually protect the user and prevent that from being possible. But what I'm absolutely interested in is being able to intermesh my mind with computers on a greater scale.

Just as I already wear eyeglasses to compensate for the failings of my eyes, I'd love to be able to wear a headcomputer to compensate for the failings of my brain. Being better able to perform complex math and solve problems; to record, catalog, and access data objectively, free from the flaws of human memory; to run a cognitive filter which points out logical fallacies in my thinking; to be able to navigate spaces with incredible precision and no personal experience required... there are so many potential applications down the line that excite me to no end.

"if you had a little computer surgically installed into your skull"

What kind of doctor do you call when you come down with a virus?

Depends on which cyberpunk universe you inhabit.

In all seriousness though, any reasonable design for a cranial implant would include an access port of some kind for purposes of maintenance by tech workers without the need for doctors to get involved - assuming, of course, that your problems exist only at the software level.

If the actual hardware itself goes on the fritz, then you might need a surgeon to go in and remove the implant again so it can then be maintained by a technician. Although it'd make sense to just design the entire device in such a way that you could remove the "core" of the device from an implanted housing structure.

In short, it'd probably look something like Star Trek: The Next Generation's android character Data, with his "positronic brain" and a little flap on his head that gets opened when they need to tinker with it.

...assuming implantation even ends up being necessary, which it might not if transcranial transmission gets perfected before we find ways to prevent implant rejection.