Economic Progress in America is Slowing 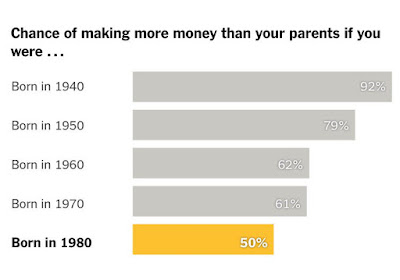 Interesting chart based on data from economist Raj Chetty, via David Leonhardt at the Times. Once upon a time it was almost automatic that Americans would make more money than their parents did at the same age. (This is adjusted for inflation.) Now it's a coin flip. And in the states that surprised America by voting for Trump – Wisconsin, Michigan, Ohio, Pennsylvania – the percentage is less than 50.

According to Chetty, the rise of inequality has caused more of this change than the slowdown in overall economic growth. If inequality had not increased since 1970, the share of Americans earning more than their parents would be 80 percent.
Posted by John at 12:07 PM

I wish this article talked about changes in buying power as well as income.

Yes, I also wonder about these numbers, but it is just very hard to account for new technology in making these comparisons. As someone who lives on the internet, I put great value on these new things, more than shows up in the straight economic comparisons.