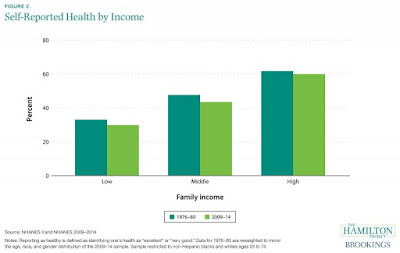 Peter Orszag calls attention to a study from the Hamilton Institute that tries to explain why rich people live longer in our society, and why the disparity has gotten greater. The authors compared recent data with data from the 1970s. The data on rich vs. poor are interesting, but I'm more intrigued by what they say about change over time. As you can see from the graph above, it's clear that rich people report being healthier. But it's also clear that people in every income group report worse health than in the 1970s. They have another graph that shows the change is concentrated among younger people: people 50 to 74 report better health, but every younger group (the data is arranged in five-year blocks) reports worse health. Some of that is due to increased obesity, but the authors say that is not enough to explain the whole change. Maybe we just expect better health these days. 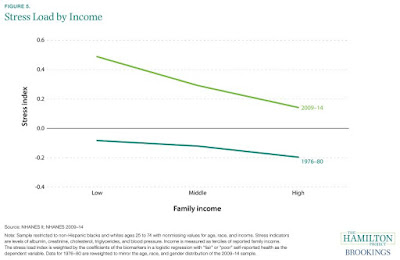 But why are richer people healthier than poor people? The authors think the reason is stress. They report that "biomarkers of stress" are worse for poor people than rich people, and furthermore that the difference has gotten much bigger over time. You can see this in the graph above. But the main thing that jumps out at me from this graph is how much worse these biomarkers have gotten since the 1970s. According to this, rich people today are much less stressed than poor people, but on the other hand they are much more stressed than poor people were in the 1970s.

Can that be right? I'm dubious. So I checked to see what these "biomarkers of stress" are:

The authors say these are commonly used markers of stress, but they look to me more like general indications of health. On the other hand rich people today report being healthier than poor people used to, so that isn't quite right, either.

I don't know what to make of this. But if it's really true that whatever is making poor and middle class people less healthy than rich people has gotten much worse since the 1970s, that could explain a lot.
Posted by John at 7:44 AM