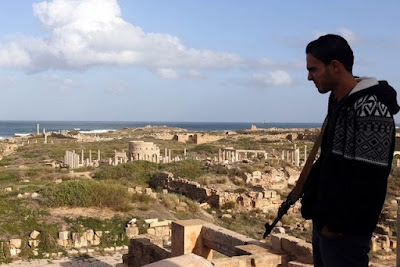 
Ali Hribish stands by the Arch of Septimius Severus which dominates Libya’s ancient city of Leptis Magna, brandishing letters of thanks for his efforts to protect the site.

The former electricity company employee who is in his 50s has become the Roman city’s unlikely saviour, protecting it from looting and vandalism amid the chaos that has rocked the country since the 2011 downfall of former leader Muammar Qaddafi.

Despite having no background in archaeology, Mr Hribish gathered a band of fighters who dedicated themselves to preserving the ancient Roman city, a Unesco World Heritage site.

While others set up armed groups to protect banks and public buildings, "we immediately thought of Leptis Magna," says Ashraf Mohammed, 33, one of the first fighters to join Mr Hribish’s group.

"A bank can be rebuilt, but our monuments and our history are things we can’t replace."