David Reich, The State of Research in Ancient DNA 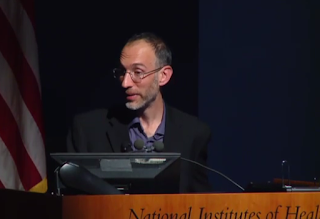 David Reich, who leads one of the five or so top labs in the world for extracting and studying ancient DNA, gave a talk at the NIH on September 21 in which he reviewed the state of ancient DNA studies. You can watch the whole, hour-long talk here, if you're interested; I thought it was amazing. Some highlights:

The Explosion of Data

Over the past 6 years, the amount of ancient human DNA we can extract from a typical bone sample has increased by more than 10,000 times.

As a result of that technological leap, the amount of data available has simply exploded. In 2010, three high-quality (at least 5% of a complete genome) ancient DNA samples were published. In 2014 there were about a dozen. In 2015, 350 were published. Now, Reich's lab alone has more than a thousand ancient DNA samples they haven't gotten around to publishing yet. The dramatic increase in available data in just a few years has transformed the sort of conclusions we can draw about the past.

No Switch for Modern Humanity

The first people with skeletons like ours, what we call fully modern humans, emerged sometime around 200,000 to 150,000 years ago in East Africa. But so far as we can tell they were behaviorally just like other sub-species of Home sapiens, making the same kinds of tools as Neanderthals and others. No major change in behavior is visible until after 60,000 years ago, when more complex tools, decorations, rituals and so on start to show up in the archaeological record. Some people have speculated that this dramatic change might have been the result of a small group of mutations or even a single mutation that acted as a "switch," turning on modern human behavior. Reich said that so far efforts to find this switch have turned up nothing; there are no changes in the genome around that time that might account for major behavior changes, and furthermore many modern human groups seem to have separated from the rest of us tens of thousands of years before modern behavior appears in the record. 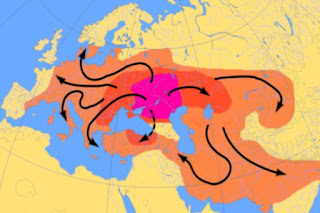 Indo-Europeans and the Plague

The thing that most blew my mind was something about the population history of Europe. Reich spent a fair amount of time explaining how the genetic data shows that modern Europeans are derived from three sources: hunter-gatherers who were in Europe before 9,000 years ago, farmers from the Middle East who migrated to Europe between 8,500 and 6,000 years ago, and a third group that arrived from the steppes around 4,500 years ago. (It seems fairly certain that this last group spread Indo-European languages.) It's an amazing presentation, very clear and thorough, although unfortunately you can't make out his graphics very well in the video.

At the end of his talk, when he was discussing the directions of future research, Reich asked the question: how were the pastoralists from Ukraine able to invade densely settled regions of Europe and leave such a strong genetic imprint? Well, he said, studies of the source culture in Ukraine, which we call Yamnaya, have shown that about 10 percent of Yamnaya had plague bacteria in their bones. (Which means they probably died of the plague.) This is the same organism that caused the Black Death and other great European plagues, although apparently not as virulent as the later form. But it seems to have been endemic on the Bronze Age steppe.

So what if Yamnaya herders, moving west, brought the plague with them and spread it to European populations that had no resistance? Perhaps it killed huge numbers of people, creating the spaces into which the Indo-European peoples moved. This could also account for the other weird European event of this period, the spread of the Beaker folk across the Atlantic fringe; perhaps they were moving into areas where the population had been battered by disease, accounting for their remarkable genetic success.

And that is just a sample of the idea Reich tosses off in this lecture. I feel privileged to have witnessed this amazing revolution in our understanding of the past, and I feel certain that it will continue to answer many questions that had seemed impossible to answer before.

I have discovered that you can download the lecture in a high-resolution format from the NIH web page, and if you watch that the graphics are legible. But it's an 800 mb file.
Posted by John at 9:24 PM

We know that when virulent, fatal diseases enter a region with little or no resistance, the die-off is massive and other new peoples move in - typically the ones who brought the disease. We also know that cultures that had closer ties to animals had a greater resistance to many such diseases.

Knowing this, steppe nomads on horseback seem perfectly suited to expanding outward explosively, which is exactly what we see in history time and again. They live by grazing and hunting, and when times are bad they compensate by roaming farther afield and even raiding other sedentary peoples. Their horses let them travel huge distances in short periods of time, their hunting skills allow them raid and make war effectively, and their exposure to animal pathogens allows them to act as disease vectors to others, weakening them and opening them up to further raiding and eventual displacement.

Eventually you get Atilla at the gates of Rome, and Temüjin reigning over an empire stretching from St. Petersburg to Taipei.

The 60,000 year ago time frame corresponds nicely with the Yuval Hariri idea that the key differentiator for sapiens was a cognitive, rather than physical, change enabling previously impossible levels of coordinated behavior supported by myth-making.