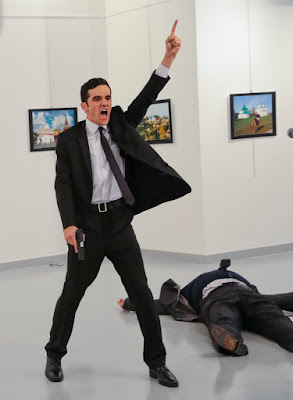 When I saw this photograph on the front page of the Times yesterday, I assumed it was from a TV show. I was startled to discover that this is an actual photograph of the assassin who killed Russia's ambassador to Turkey, right after the deed, with the dying man on the floor behind him. He is shouting "Don't forget Aleppo! Don't forget Syria!" to the cameras that had been recording the ambassador's speech.

The assassin, Mevlut Mert Altintas, was part of the security detail for the event. It's a disturbing sign of how the Syrian war and the Erdogan regime's response to it may lead to even more conflict and chaos in Turkey. Nobody yet knows if the assassin was part of any organized group, or, if so, which one, since there are several different groups in Syria and Turkey that would be happy to assassinate Russians.

But it also disturbs me that my first reaction on seeing this photograph was to think of television. I suppose that is partly because this was taken through a TV camera that was recording the ambassador's speech; part must also be the way the handsome assassin is dressed, just like a TV assassin would be. The gesture also seems more stage than reality.

I worry a little about my mind when it has been filled with so many images of staged violence that real violence looks staged to me.
Posted by John at 8:11 AM

I worry a little about my mind when it has been filled with so many images of staged violence that real violence looks staged to me.

To be fair, most real violence doesn't look like this.

Much of the effect is attributeable to the factors you already mentioned. The clothing, the stance, the environment, the film quality (or digital capture quality, as is more likely) - they all just so happen to fall in line with cinematic conventions. It doesn't have the same look or feel as, say, a still frame from a C-SPAN broadcast showcasing the floor of the senate, or a CCTV security camera feed, or an amateur photographer's shaky cell phone recording, et cetera.

This is in all respects an exceptional case of violence. It's actually quite rare for clean cut men in suits to get shot by other clean cut men in suits; the vast majority of homicides don't happen in front of professional grade television cameras, or in such artificial and stage-like surroundings; most murderers don't stop to address onlookers, et cetera. Nothing about this instance of violence is typical, and the fact that it resembles common fictional portrayals is mostly just bizarre coincidence.

Most real violence is ugly, squalid, brutal, and mundane - very much unlike our common film and television depictions. This is just an uncanny random exception.