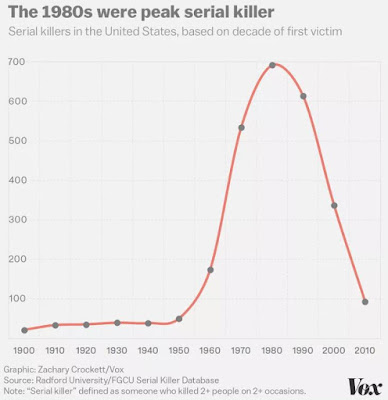 Here's another piece of good news about contemporary America: murders by serial killers are way down. The data comes from the FBI and Dr. Mike Aamodt, a forensic psychologist who has been intensely studying serial killers for decades. Note that the FBI's definition of a serial killer just means killing people in at least two separate incidents, so it includes lots of gang enforcers and the like. But there are certainly many fewer maniacs of the John Wayne Gacy type. And not only is the number of serial killers going down, they are claiming fewer victims; killers with five or more victims have declined from 42% of the (decreasing) total to 13%.

The steep rise in the graph from 1950 to 1980 has something to do with better record keeping and more awareness. But the steep decline is probably real. Asked why, Dr. Aamodt offers this:


“One of the keys here is a change in parole laws — longer sentences, things like the three strikes rule,” he says. “If you take a look at serial killers in our database prior to 1980, 22 percent had killed someone, gone to prison, been released, then killed again when they got out. You get a big reduction in that after 1980.”

Aamodt also cites improved forensic science (“We’re getting better at catching criminals after one murder instead of three or four,” he says”), as well as a culture that generally engages in less risk-taking. It used to be acceptable to hitchhike or let a child ride her bicycle alone in a park; today, it is more difficult for serial killers to find vulnerable victims like this.