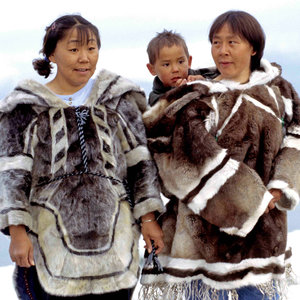 Anthropologists have long been curious whether the Inuit have genetic adaptations that help them survive in the Arctic. Now scientists have the genetic tools to find answers to this question, and studies of the Inuit genome under way. So far two parts of the genome have been found in which Inuit differ from the rest of us. One contains genes that govern how we metabolize fat, and it may help Arctic people survive on a diet heavy in seal and whale blubber. (Across the world there is a lot of variability in our digestive genes; our famous ability to survive almost everywhere is largely cultural but it does have a genetic component.) The second area of difference, newly announced, is in two genes that regulate the storage of fat and its distribution across the body. This variant, say the discoverers, seems to come from the ancient humans known as Denisovans after the Siberian cave where they were discovered.

Because our knowledge of the Denisovan genome is far from perfect, and this particular gene variant has not been much studied in modern humans, the authors say this is not certain. But it makes sense. Fully modern humans evolved in Africa, and the leading theory about why some genes from Neanderthals and Denisovans survived in Eurasian people is that they helped them adapt to the cold. The people of cold places do store fat differently than those from the tropics. So if these two genes do come from the Denisovans, that would be another support for the theory.

Original article here.
Posted by John at 8:42 AM