One of the many fascinating aspects of David Reich's recent talk on archeaogenetics at the NIH (see here for discussion) is his account of how modern races took form. If you look at Eurasia now, you see a great deal of genetic similarity across two broad regions. Across West Eurasia, from Pakistan to Norway, people are genetically very similar. The same is true in East Asia, from Indonesia to northeast Siberia, including Japan. This is the data that nineteenth-century scientists were drawing on when they defined the Caucasian and Oriental or Mongoloid races. These nineteenth-century scientists imagined that the modern races were all descended from common ancestors. 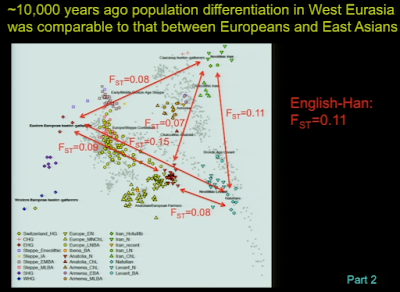 But modern archaeogenetics reveals something different. By examining the DNA extracted from old skeletons, we see that 12,000 years ago West Eurasia contained at least four very distinct populations that Reich calls West European Hunter Gatherers, East European Hunter Gatherers, Early Anatolian/European Farmers, and Early Iranian Farmers. These populations were, in statistical terms, as different from each other as modern races; the genetic difference between hunter gatherers in eastern Europe and farmers in the Levant was greater than the genetic difference between modern English and Han Chinese populations. 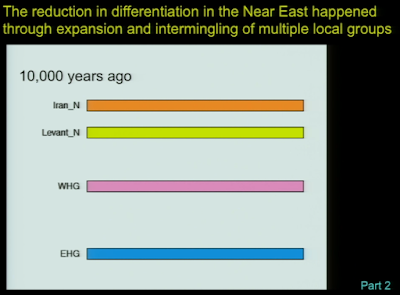 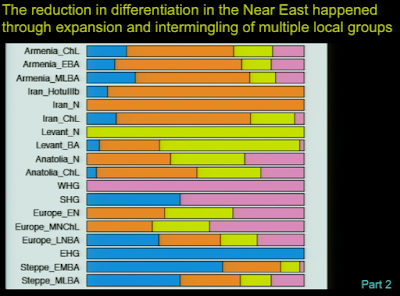 The modern Caucasian "race" was created by the mixing of these four (and possibly other) populations. Compare the two bar graphs above, which illustrate this mixing. 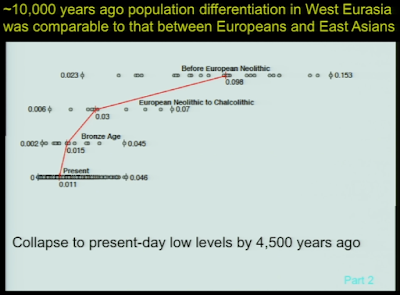 The data suggest that most of this mixing took place before 2000 BCE, largely as a result of the spread of agriculture. The data for East Asia are at present not nearly as good, but Reich believes that they will show the same process, with the modern East Asian race created by the mixing of distinct pre-Neolithic populations.

The "pure" race is a myth; all human populations are mixtures. Genetic data allows us to show that the characteristics of an archetypical northern European are drawn from diverse populations. For example, blue eyes come from the ancient hunter-gatherers of western Europe, but they had dark skin; the genes for light skin come from early farmers in the Near East.
Posted by John at 10:11 PM