When Cows Can Milk Themselves 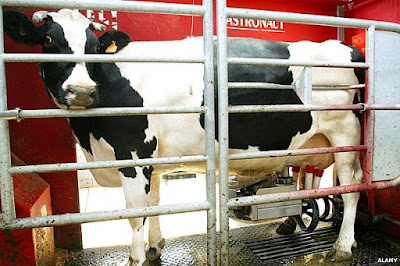 For generations, dairies have been hooking cows to milking machines twice a day. But now there are robot milking machines that allow cows to enter whenever they want, and it turns out that some cows want to be milked a lot more than twice a day. The average is three times a day, and for the highest producers it is four to five times a day. It seems that we have bred cows to make so much milk that being milked twice a day is not enough to relieve the pressure. Empowering cows to make their own decisions also leads to more milk production, an increase of 8 to 12 percent. So the cows are happier and the farmers get more milk.

Of all the strange things.
Posted by John at 9:33 AM