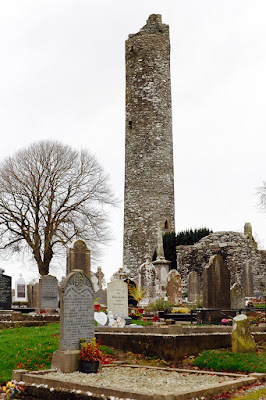 Jane Smiley, the author of one of my favorite historical novels (The Greenlanders) recently went to Newgrange and other Neolithic and historical sites in the Valley of the Boyne, and she wrote up a nice little account for the Times:


Perhaps more unique is the “roofbox” — something like an open window set onto the heavy lintel stone that defines the doorway. The two people who went before me came out, and I entered the passage. Like many ancient passages, it wasn’t built for tall women like me. Heavy stone slabs lean inward; it is a tight corridor; I felt as if I was walking slightly down hill. There was a little light, and I avoided bumping my head, but I could hardly see the interior engravings. At the bottom of the path, it was difficult to gauge how far I’d come.

There was nothing grand about the passage until I got to the bottom, and turned around. The guide told us what to look at. And then, the demonstration — how, for 16 minutes on the morning of the winter solstice, and only then, the sun shines through the roofbox, down the passage right to the bottom, right to what might be some sort of altar with a basin sitting on it. Someone outside shone an electric light through the roofbox (which was discovered in 1963), demonstrating the effect. I imagined the miracle of such a thing, total darkness pierced so precisely by sunlight. The tools used to build the monument were made entirely of stone, bone and wood.