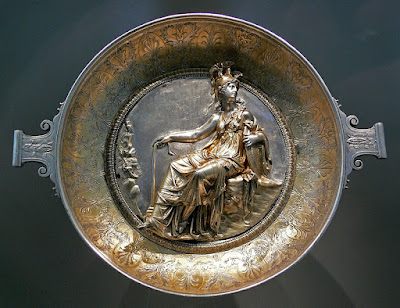 The Hildesheim Treasure is a trove of Roman silver that was unearthed by Prussian soldiers in 1868 near the small town of Hildesheim in Hanover. That puts it well outside the empire, spawning lots of speculation as to how it got there. 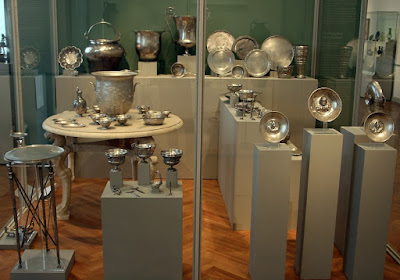 The treasure probably dates to the 1st century CE. So was it taken from Publius Varus after the disastrous Roman defeat in the Teutoburger Wood? That view has it defenders among scholars who think the whole assemblage of 70 vessels form a set of sorts. 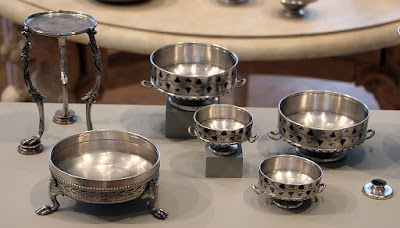 But others think the pieces are too disparate in design to have been used as a set by such a rich, cultivated man as Varus, and that they were more likely accumulated over time. But how could that have been done? So the origin of the collection remains something of a mystery. 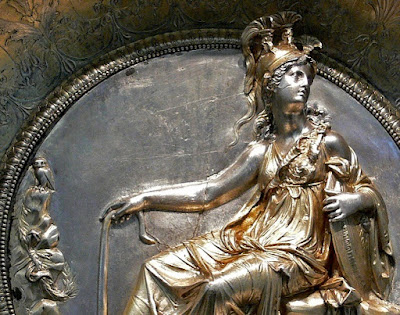 The most famous piece is the Minerva Bowl, above and at the top of the post. 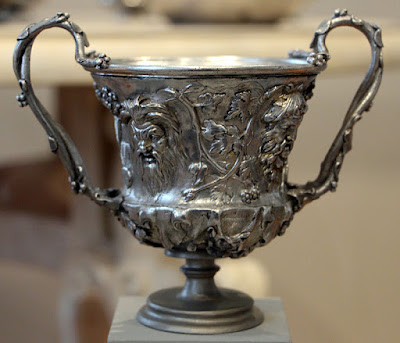 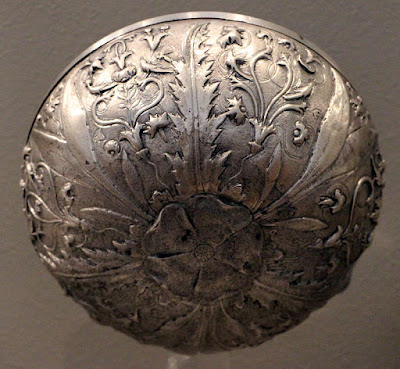 But there are other amazing pieces. 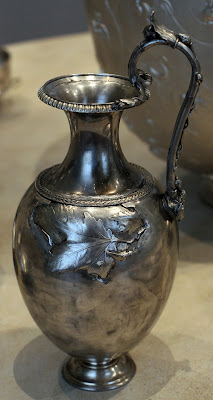 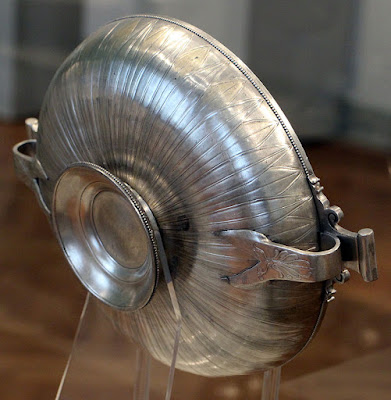 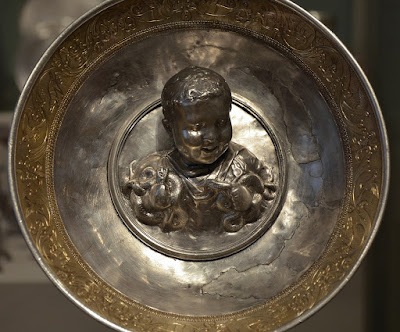 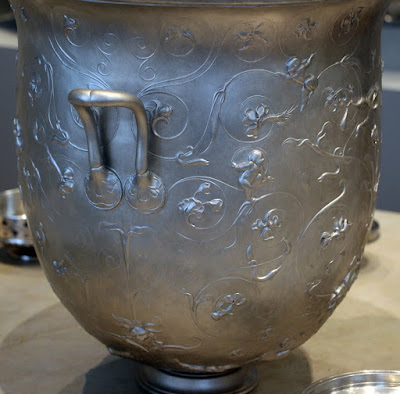 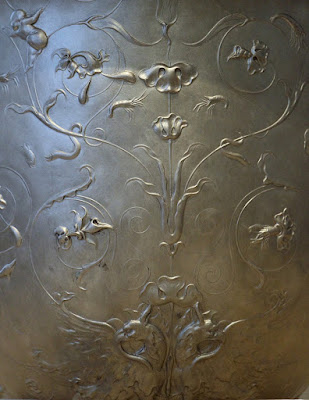 The second most photographed item in the treasure is this krater. 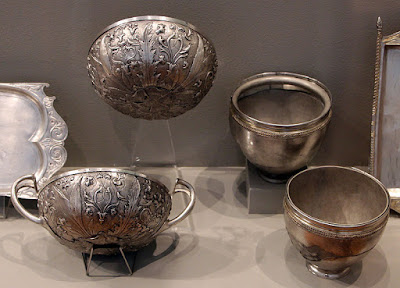 Considering how poorly silver survives in average soil, we are very lucky that so much silver remains from the ancient world.
Posted by John at 5:34 PM

"But others think the pieces are too disparate in design to have been used as a set by such a rich, cultivated man as Varus, and that they were more likely accumulated over time. But how could that have been done?"

There were a lot of tribes in the north, and the border was fairly porous, even despite Roman efforts to defend it. By 166, there was already large scale raiding into Italy proper by groups like the Marcomanni. By 233 we see largely Romanized tribes banding into larger confederations, like the Alemanni, who raided extensively, overran the Limes Germanicus, and plundered throughout Italy.

One key question is when was this silver actually buried. It may quite well be that the silver itself is all 1st century pieces, but such objects are valuable heirlooms which would be passed down within wealthy families for generations.

Suppose they remained in Roman hands until the 2nd or 3rd century, only to then be plundered in raids and carried back north as loot. Or suppose a number of wealthy families of a Roman settlement facing an imminent sack collected their silver and offered it to the invaders as a bribe in order to buy their lives and homes. Or suppose as an effort to appease the tribes that were swarming uncontested over the border, the Roman authorities offered tribute to certain chieftains to try to buy peace or to seal treaties with their tribes.

The Roman elite were very fashion conscious, and old silver pieces were always melted down and remade every so often. (They also get worn from use.) All the other treasures of Roman silver contain only or almost only pieces made within a few decades of deposition. I think it's fairly certain that this stuff left the empire in the first century. As you say, there are a lot of possible mechanisms for that. But other Roman silver from barbarian contexts is mixed with other sorts of treasure, like gold jewelry and fancy glass; keeping it separate as a special silver collection would be a Roman thing, so requires us to imagine a very Romanized barbarian king.

The spare, sinuous vines on some of the objects is very reminiscent of the exterior design on the Ara Pacis.

I greatly appreciate the input, as there's much in the way of details like these about archaeology and contemporary cultural fashions I simply don't know.

So it would seem that the plunder angle appears somewhat weak given the information you mention and the likelihood of deposition in the first century - aside from the Varus angle.

But in my mind, that also seems not very likely, given what you say about Roman elites and their tastes in fashion. The one facet of that notion that makes it seem plausible to me is that as a general on campaign, Varus might have purposefully taken a mixed set of silver of lesser value, knowing full well it could conceivably be lost to the rigors of war. If I'm not mistaken, I seem to recall a similar practice amongst ship's captains in the age of sail.

But then again, given the timeframe, the other options don't seem all that much more plausible either. Raiding is still possible, and there might easily have been much more of it happening than we know about due to lack of surviving records. Although most Roman settlements in that region in that time period were relatively new and small, there would have been a number of colonies large enough to attract a wealthy enough class to produce or at least own this kind of collection of silver.

...here's a question. Would silver in the far flung colonies be as likely to be melted down and recast in as short a period of time? In the larger and more important colonies like Cologne, perhaps - but what about the smaller, more remote colonies?

Tribute is also still a possibility. The Batavian Revolt comes to mind, coinciding with the civil war of the Year of Four Emperors. Vespasian, for example, was initially glad that the Batavians were tying up troops in the north which otherwise might have been recalled against him, and he offered them indepedence. Might he have seen fit to send them a chest of silver in an attempt to secure their favor and cement an agreement (despite their subsequent refusal and continued rebellion)? This could also explain the disjointed nature of the set - the Romans had a dim view of the germanic tribes, and I imagine they might send a somewhat hodgepodge collection of items rather than a more fashionably unified set, under the belief that "mere barbarians" wouldn't care either way.