The Twilight of the Svans 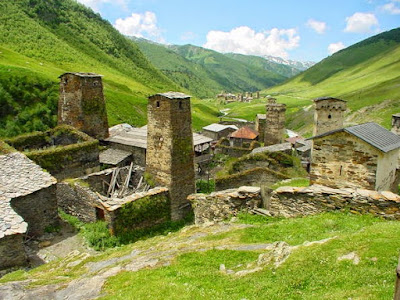 The Svans are a small ethnic group, numbering about 40,000, who have long lived in a mountainous part of northwestern Georgia. I wrote back in 2014 about their famous tower houses.

Today I was reading a little travelogue of a trip to the region, and from it I discovered that the Svans still maintain a distinct religion with many interesting features.


They also practice their own religion, a fusion of early Christianity and paganism. The day we met, Valeri showed me his family church, a tiny, fourth-century hut littered with sacrificial bones and notched, wooden staffs, each of which represents a local family. 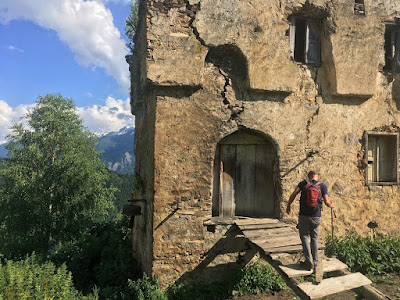 That intriguing hint led me to look further into Svaneti religion. Georgia was converted to Christianity in the 3rd and 4th centuries and became a bastion of Orthodoxy. But then somehow the highlands of Svanetia came to be ignored by the church hierarchy – some blame the Mongol invasion – leaving the Svans to go their own religious path under the leadership of ill-educated and often illiterate priests. As a result the religion practiced in Svan churches came to be a mishmash of Christianity, Zoroastrianism, and folk paganism. I haven't found any explanation of the wooden staves, but I have found several accounts of the belief system and the rituals:


The chief Svan deities are Khosha Ghêrbet ("Great God"); Jgeræg (Saint George), the chief protector of humanity; and Tëringzel (archangel). Important female figures include Barbai (Saint Barbara), a fertility deity and healer of illnesses; Dæl, goddess of the hunt and protector of wildlife in the high mountains; and Lamæria (Saint Mary), protector of women. Christ (Krisde or Matskhwær, "savior") presides over the world of the dead.

Saint George is a mighty figure throughout the Caucasus, taking on some attributes of Christ (including the title "savior") as well as ancient gods of war and the hunt. Anthropologists consider him the patron of those activities in which men leave the community to seek their fortunes: war, trade, hunting, collecting wild honey. Saint George was generally honored with offerings of alcohol, wine in the lowlands but vodka among the mountain-dwelling Svan.

More distinctive to the Svans is their great interest in the goddess Dæl. She is the goddess of wild animals and in particular of the ibex, the horned mountain sheep that dwells in the highest and most remote places.


As described in Svan folklore, Dæl resembles a woman of extraordinary beauty, with long, golden-colored hair and radiant white skin. She dwells high up in the mountains, usually out of the reach of humans. Her home is a cavern, and by day she watches over the herds of wild animals under her protection, as a human shepherd would guard sheep or goats. Some accounts even picture her milking an ibex. At the same time, she is not adverse to sharing animals from her flock with hunters, as long as certain conditions and taboos are respected. Hunters must not kill more ibex than they can carry back to the village, nor may they take aim at specially-marked animals believed to be a transformation of the goddess (e.g. an ibex with golden horns). If a hunter is successful, certain body parts from the slain beast must be offered to Dæl in thanksgiving. Dæl is particularly sensitive to violations of the purity of the mountains, by which is meant pollution from women's menstrual blood. A man may not go on a hunting expedition, for example, if one of the women in his household is in childbirth or having her period. The penalty for violations of the conditions imposed by Dæl range from lack of hunting success to a fatal fall from a cliff.

Many stories feature the relationships between Dæl and a great human hunter:


The basic plot, of which there are numerous variants, begins with an encounter between the goddess and a legendary hunter who has been chosen by Dæl to be her lover. She gives him a token of their love — a bead, ring or charm — and requires him to avoid all contact with human females, including his own wife. As long as he remains in the goddess's good graces Betgil enjoys remarkable success, never once returning home empty-handed. One day, however, he breaks his promise, sleeping with either his wife or his sister-in-law. The goddess changes herself into a white mountain goat, and comes down into the village square where Betgil and his kinsmen are dancing in a circle. The goat runs between his legs into the middle of the circle, then doubles back toward the mountain with Betgil in hot pursuit. The hunter and his prey climb higher and higher, even as the path beneath them crumbles away. On reaching the summit the goddess resumes her original form and confronts the terrified Betgil, who is by now clinging for dear life with only his right hand and left foot. 'Where is the bead I gave you?' she demands, knowing full well that the hunter's wife had stolen it after they slept together. She vanishes, leaving the doomed Betgil to fall to his death on the rocks below. 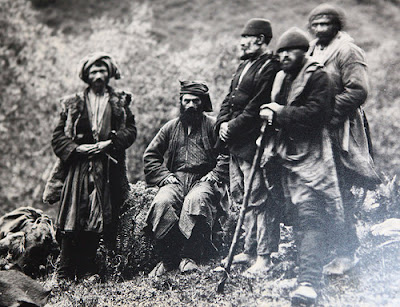 Svan men, 1890
These stories reflect a strong division between men's and women's spheres that is still maintained among the Svan, especially in ritual matters; women traditionally did not enter the tiny huts that serve as Svan churches, although some say this has changed. But women had their own rituals from which men were excluded, many of them focused on the hearth and on special domestic deities that protected the home.

A few interesting details:
Most recent articles on Svan religion focus on fears that it may disappear:


Valeri worries that if more people leave the villages, their faith will disperse and die. “We understand the rules of the religion, but no one else does,” he says.

Besides the destructive forces of modernity, Svan religion is under attack by a the Orthodox church; as in Russia, post-Soviet nationalism in Georgia has been accompanied by a resurgence of the national religion. A recent attempt by Norwegian do-gooders to organize a festival of Svan culture was quashed after objections by church leaders. 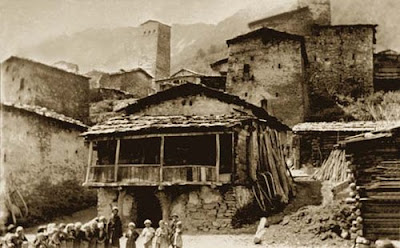 Svan village in 1890
But the Svan are not going without a fight. In recent decades thousands of Svan have moved south onto the plains of Georgia, but many of them have settled in a few villages that have become a sort of little Svanetia. According to an article by Stephane Voell that I found on academia.edu, the residents regularly gather together and swear oaths on icons (a Svan tradition) to preserve their old ways and most families have established altars for animal sacrifice in the surrounding woods. So it seems that Svan culture will be with us for many years yet.
Posted by John at 7:34 AM

Very interesting and reminded me of the Spanish Penitentes of Northern New Mexico and Southern Colorado who also were cut off from their base religion and created their own mix of pagan and catholic religions which are still practiced there today though the numbers are dwindling.

Kadira, I'm intrigued by your description of the Penitentes. My (limited) reading on them has only shown me some fairly traditional Hispanic-Catholic practices (albeit with a strong emphasis on extreme penances, crucifixion performance, etc.) and a strong valuation of pure-blooded hispanismo. Certainly I've seen nothing like the Svans, or even much like stereotypical Mexican Indian-Catholic syncretism. I'm wondering if you could point me to sources, websites, etc., for Penitente pagan-catholic syncretism; this would be for purposes of teaching as much as my own curiosity.

David, I am a lay person and so much of my knowledge comes from living in the area as a young "gringo" woman. At that time they would still parade through our small village carrying the Virgin Mary (individual to each small chapel) on Eastern Sunday. It was always men and they would pretend to snap aspen branches against the backs of the men in front of them (I think the church had outlawed the real thing at some point). This would have been the very early 70's and within 5 years it ceased to happen. The morados where they worshiped, were a mystery to us all. Small adobes with short doors, no windows, and no markings of any kind on the outside. These too started to look abandoned around the mid to late seventies. Though I have photos of a few I took on many long journeys into the mountains.

But the stories: That when the Catholic church removed itself back to Santa Fe during the Pueblo revolts, feeling abandoned by their church they became more violent and bloody. Self flagellation was always part of their religion but it became more aggressive, and of course the crucifixion performance but really conducted. These could always have been tall tales but from this far view it did not feel that way. Truchas/Trampas between Santa Fe and Taos on the high road where hostile places in those days, one traveled on through. The lower San Luis Valley in Colorado has numerous villages on the east side up dirt road canyons in the Sangra De Cristo mountains, all have or had their morados.

Google of course has a million and one articles none that seem to me to capture what I have seen or heard and I would imagine the U.N.M. has some students thesis, if not then some grad student missed out on a real experience.

I will point out that in Northern New Mexico they consider themselves Spanish from Spain with a few having green eyes and once in a while even blue (Then of course they say they are from the Basque Country. I am aware that the conquistadors raped and pillaged their way north and certainly the pueblo's women paid that price. But as for the word "Mexican" one would be run out of town. My children and I always say Spanish...so much so that my Texan son-in-law will correct us and say he is Tex/Mex!

There was just something about the Svan's that ran a ghost of feeling through my memory. For that I thank you. I have read and shared your blog with friends for a while now so forgive my ignorance and please keep enlightening us. My regards.