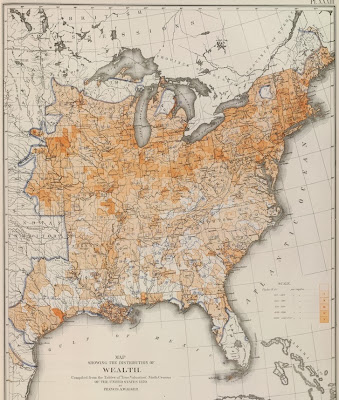 The head of the US census bureau in the 1870s was a pioneering statistician named Francis Amasa Walker. Among his most ingenious experiments was the 1874 Statistical Atlas of the United States, which presented a huge amount of data from the 1870 census in map form. The map above shows per capita income, ranging from white (under $175) to orange (over $1300). You can see that the North was a lot wealthier than the South. Partly this was the result of the Civil War, but a map from 1860 would actually not look much different. Note that there just weren't enough people in south Florida to even make the map.

Walker's impressive performance at the Census Bureau landed him a professorship at Yale, and he went on from there to become President of MIT from 1881 to 1895. He also lands a spot on my list of People Who Deserve Credit for Admitting Past Errors. When he superintended the 1880 census, he discovered that there had been major errors in tabulating some statistics in 1870, and he went out of his way to publicize this even though it invalidated parts of his own famous atlas.
Posted by John at 8:18 PM