Get thee behind me, Lord of Rebirthing and Fire Walking 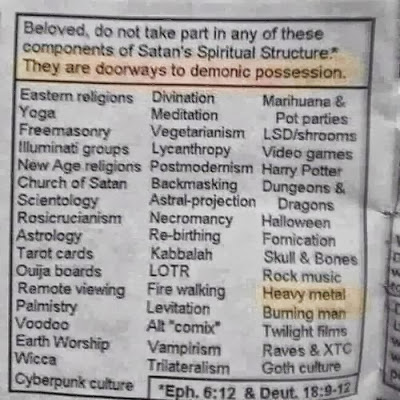 I'm not sure where this came from -- wherever that was, it seems to have come unmoored and gone wandering around the Internet on its own. But I'm going to assume that it was written with serious intent. If it wasn't, well, we've all seen plenty of similar screeds that were. I find the mindset of these things fascinating. No fear here of the seven deadly sins -- pride, envy, anger, gluttony (at least of meat) -- those are all things Beloved can handle on his or her own. No Four Horsemen. No, the real dangers are satanic magic masquerading as amusement, and hippies. Hippies, it seems, are especially dangerous when they are pretending to be full of spiritual goodness. Meditation! Vegetarianism! Once they get you hooked on mindfulness and bean casserole, they gradually ease you onto the ascending ladder of ever darker satanic rites: tarot cards, voodoo, vampirism, postmodernism.

Trilaterialism, in case you wondered, is what they do at the Trilateral Commission, a 70s-era confab where Cold War intellectuals got together to make each other feel important. Founded by the Rockefellers. For some reason the John Birch Society latched onto it and blew it up into the planning stage of One World Government, sort of like the way some anti-government types today have latched onto FEMA as the shock troops of the Takeover.

While I'm on the subject, how did this whole FEMA thing get started? I've worked for them, and let me tell you the only way they are going to hurt anyone is by accident. Our government has all sorts of really dangerous parts -- CIA paramilitaries, NSA spies, armed drones, a nuclear arsenal -- how did FEMA get tapped as the cutting edge of dictatorship? It seems to me that I never heard this sort of stuff until after Katrina flooded New Orleans, when FEMA was constantly in the news looking horribly incompetent. Did people watch their performance and think, "That can't possibly be their real jobs. They must be paramilitaries disguised as emergency workers."

Where do I sign up to take part in lycanthropy?

Skull & Bones is an elite secret society at Yale, and unless Beloved is an arrogant 19-year-old scion of privilege, he is in very little danger of being asked to participate. But at least fear of Skull & Bones makes more sense than fear of the Trilateral Commission.

Is it just me, or does fornication seem out of place on this list?

I wonder what our author thinks "cyberpunk" means.

When I first read "backmasking" I thought it said "brickmaking" and wondered if it was some esoteric offshoot of the masons. When I read it right I was still puzzled, and had to google it to discover that it means hiding messages in music by recording them backwards. Is it the recording that is the danger for Beloved, or the hanging around with other teenagers trying to decipher the strange groaning sounds coming out of the reel-to-reel? "Was that 'Paul is dead' or 'Go to bed'?" Actually I guess you do this on a computer these days, which must make it a lot easier.

But enough talk! Now that my kids have tried on their Halloween costumes, I think I'll go see if my sons want to play Dungeons and Dragons. . . .
Posted by John at 6:44 PM

I have seen these actual pamphlets as far back as when I was in college. They've been updated somewhat.

Note how they use the word "shrooms"- just to show that they're with it and in touch with today's youth.

And where does "marihuana" come from??