The Fourth-Century Britons of the Poundbury Cemetery, or, Life in Ye Olden Times 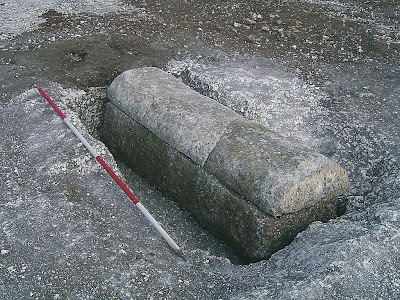 The cemetery at Poundbury in Dorset, England produced about 1,200 skeletons dating to the Fourth Century CE. This was the height of Roman Britain, when the population was, so far as we can tell, at its wealthiest and most Romanized. Robin Fleming summarizes what the bones tell about their lives:


In spite of its modest prosperity, late Roman Britain was not Paradise. Those interred at Poundbury had led peaceful lives, but the days of most were spent in hard physical labour. Although a single infant buried there may have died from battering, there is no other evidence of violence. The injuries most people suffered were those of wear and strain, sustained over long years of grinding labour. Adults, judging from the state of their joints, lived with the nagging aches of arthritis and sore backs. The spines and shoulders of Poundbury’s men were those of people engaged in heavy work from early adolescence to what passed in the fourth century for old age. Their joints showed the wear of digging and lifting, of driving carts and working ploughs. Women, for their part, lived with aching knees. The state of their legs suggests that they spent long hours squatting, probably while grinding corn at rotary querns. Men and women, therefore, were set apart by the labours they performed each day and by their small physical agonies.

Children died in great numbers around Poundbury; not newborns so much as toddlers. The babies who survived early childhood often lived through adolescence, but death again took many, both men and women, in their early twenties and thirties. Indeed, about half of all those who reached the age of 5 died between the ages of 20 and 45. Still, there were a few old people in Dorchester, some well into their eighties when they died. So the communities that buried their dead at Poundbury were full of children and adolescents; they had many 20-year-olds, fewer people in their thirties, and still fewer in their forties.

Infectious disease doubtless played a part in these heartbreakingly early deaths. There were periodic outbreaks of smallpox around Dorchester, and a few suffered from tuberculosis. For the most part, though, the brevity of their lives was the result of long-term, low-grade malnutrition, not from starvation, but rather from a flawed diet. Children grew slowly (the growth of young children lagged two years behind those of comparable age today), and puberty came late; and those who lived to adulthood had light bones and poor teeth. These are classic signs of poor nutrition. Lead, infant feeding practices and scurvy may have been major culprits in this. Stomach maladies like diarrhoea could also compromise health, because they led to the poor absorption of nutrients from food and brought on a host of more serious complaints: gout, osteoporosis, leg ulcers and infertility were all likely common catastrophes in fourth-century Dorset. The people buried at Poundbury also suffered from parasites, in particular roundworm and whipworm, which could result in dysentery. This, in turn, produced chronic malnutrition and anaemia, especially among young children. The people eventually buried at Poundbury, like many others in Roman Britain, must have been uncomfortable and in pain. Everyone must have been a little cranky from stomach ailments, from arthritis and from gout, and ill-tempered because of head lice. These were also people habitually saddened by the deaths of their children and their friends, not from the calamity of plague, but rather from mystifying ill health brought on by dietary troubles, microbes and parasites no one knew existed.