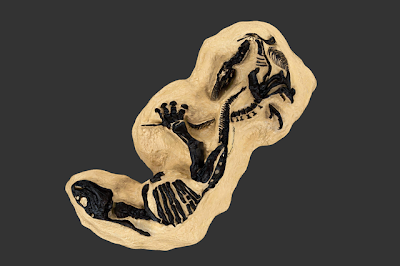 Bonhams in New York is gearing up for what may be the biggest auction of dinosaur fossils ever. Headlining the auction is the famous "Dueling Dinos" fossil (above), from the Hell Creek formation in Montana. One of these animals is a a Nanotyrannus lancensis, a predator that looks like a small Tyrannosaurus rex and is the subject of a long-running dispute about whether it really is a young T. rex or a separate species. The other is some kind of Ceratopsian, the horned group that includes Triceratops, but it appears to be a new species. What makes the fossil spectacular is that these two animals may have gone down into the mire locked in a death grip. Two Nanotyrannus teeth were found in the body of the Ceratopsian at the site, so they may have been lodged in is flesh when it died. Some paleontologists think the herbivore may have retaliated by kicking in the Nanotyrannus' chest and breaking its skull. If so, this a very rare glimpse of dinosaur combat. Plus these are just two exquisitely well preserved fossils. But they were found by commercial prospectors, which means they are going to the highest bidder at a price estimated at $7 to 9 million. 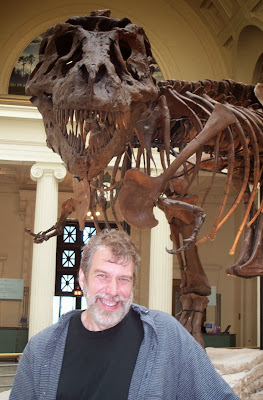 There has been a lot of hand-wringing on paleontological blogs about these skeletons going to a private collector instead of a museum, but I think some museum will likely win the auction, just like the Field won the bidding for my friend Sue. 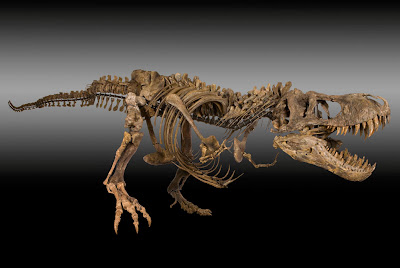 But that's not all; there are a lot of great fossils in this auction, including the T. rex above, estimated at around $2 million 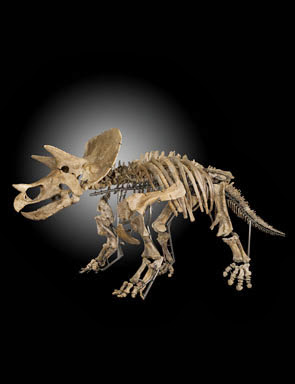 and this Triceratops, estimated at around $800,000, which I think shows an entirely unfair preference for carnivores among the fossil-buying class.
Posted by John at 5:15 PM

As someone who lived most of my adult life in the New Haven, CT area, I do hope that the paired fossil goes to a museum where many people can see it. I spent many hours at the Peabody Museum (Yale) with my daughter, who grew up loving dinosaurs, and whose very first research paper, in kindergarten, was on dinosaurs.