Bryan Ward-Perkins, The Fall of Rome and the End of Civilization 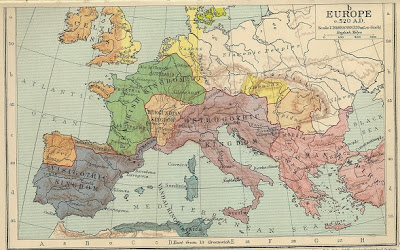 In the fifth century, the western Roman empire disappeared. Its various parts were take over by Germanic tribes -- the Franks in Gaul, the Visigoths in Iberia, the Vandals in North Africa, the Ostrogoths and then the Lombards in Italy. But what was that like? Historians do not agree and have not agreed for a long time. To some, the takeover was a nightmare of lawless thuggery, rape, political oppression, economic depression, cultural collapse, and population decline, leading to a Dark Age. To others it was a more or less peaceful and orderly transition to a different kind of culture, an early Medieval or Late Antique world no less remarkable than the classical world it replaced. Or maybe not that different at all.

Of course the popular culture has always been strong for violent collapse and a Dark Age, but among historians over the past few decades the peaceful transition view has mainly held the field. Hogwash, I say. And so does English historian Bryan Ward-Perkins. The Fall of Rome and the End of Civilization (2005) is a tightly-argued little book making the case that the transition from Roman imperial rule to the Germanic kingdoms was profound and mostly unpleasant for those who lived through it. Ward-Perkins treats the documentary evidence, but his main focus is on archaeology. It is by comparing the material records of the Roman and post-Roman worlds that the dramatic impact of the empire's withdrawal becomes most clear. 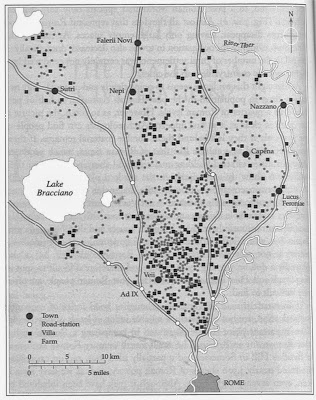 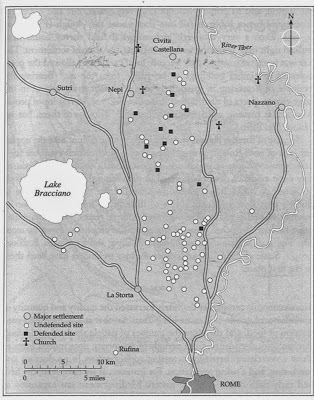 The material record of Roman civilization is so pervasive in Italy, France, Spain and Tunisia as to be a major nuisance for archaeologists. There is just so much Roman stuff lying around that it is sometimes hard to find anything else. Sites of the early Middle Ages, by contrast, are all but invisible. The maps above show one small region north of Rome, comparing the settlements of the second century with those of the fifth through the eighth. The Medieval landscape looks like the aftermath of nuclear war. Not only are there far fewer early Medieval sites, the Roman period sites are also much nicer. Even most peasants in 2nd century Italy lived in houses with mortared stone walls and tile roofs -- Ward-Perkins has a whole section on roofing tiles, which were such a familiar part of the Roman world that archaeologists seldom even mention them. By the seventh century, the few sites that can be found are wooden, with thatched roofs. 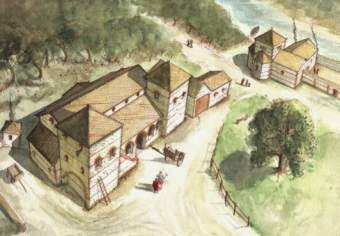 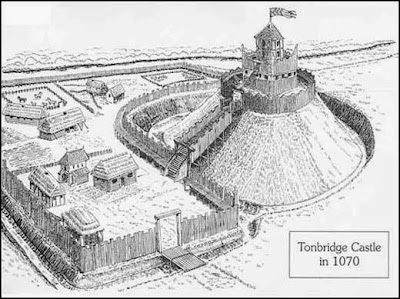 The difference in elite housing is even greater; compare a villa of Roman Gaul with its baths, heated rooms, tile roof, and so on with the miserable drafty castle of a 10th-century count. The Roman tradition of public works, like roads, bridges, and harbors, completely vanished. Stone churches were still built, but they were mostly much smaller than those of Roman times. 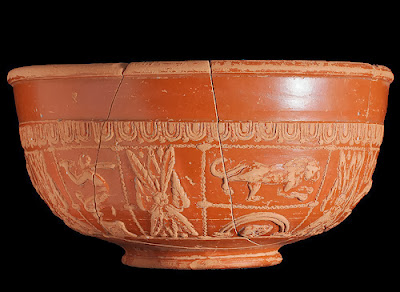 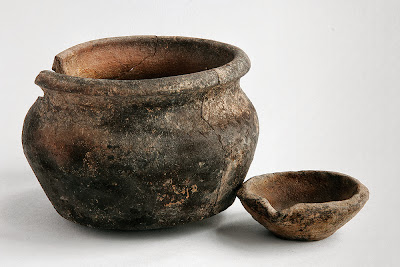 There were also big differences in many kinds of ordinary goods, like pottery, metal tools, and glass. The Roman economy was based on great specialization and widespread trade, with highly skilled potters producing huge numbers of standardized pots and selling them to consumers hundreds of miles away, who were thereby freed to specialize in whatever they did well. Between the 400 and 650 CE, those trade networks were smashed, and as a result most people had to make do with stuff made by local craftsmen. Much of which was pretty terrible stuff; most early medieval pottery was not even thrown on a wheel. There was also a lot less of it around. People of the Roman period not only had nicer pots and tools than their early medieval descendants, they had more of them. One of the odd little things that disappeared from much of Europe was iron nails. Of course it is possible to build without iron nails, just harder and more time-consuming. One of the things that people stopped making altogether was coffins. I think it says something profound about the impoverishment of the early Medieval world that most people gave up burying their parents or children in coffins, and substituted a simple cloth shroud.

I agree with Ward-Perkins that the evidence for a major decline in the quality of life for most Europeans is overwhelming. Other kinds of losses were equally profound; what percentage of the books in circulation in 400 CE survived into the Renaissance?

A much harder question is what happened to the European population. Yes, there are far fewer recorded archaeological sites in the post-Roman centuries, but that might be partly because early medieval people had so much less stuff that their sites are hard to find. Roman sites in Britain can always be seen on the surface, because of the masses of roofing tiles, pottery, and so on, but many Anglo-Saxon sites (even the royal hall of Yeavering) were only detected by aerial photography or geophysical prospecting. So maybe the people were there, just leaving lighter footprints. Yet there is other good evidence for a serious fall in population in the early middle ages. Much cultivated land was abandoned, from Wales to Tunisia. Cities shrank. Pollen studies suggest that forests expanded. If the population did shrink, as I think, it is also hard to say why. War generally does not lead to a fall in population across large areas; we can usually breed faster than we can kill each other. Pervasive disorder leading to malnutrition leading to low fertility was probably one cause, but there may also have been waves of epidemic disease, especially the bubonic plague of 542.

Of course, this does not mean that all the changes were bad, or bad for everyone. The collapse of the rather sterile classical artistic tradition -- a thousand years of satyrs chasing nymphs -- opened the way for the wonders of the insular style, and Romanesque architecture. Medieval society eventually became much more technically creative than the late Roman world, and inventions that the Romans had made but rarely chose to use (glass windows, water mills) spread widely. But not until the late thirteenth century would the mass of western Europeans have anything like the degree of civilized comfort enjoyed by their Roman ancestors. For other parts of civilization, the return took even longer. Not until the eighteenth century would European states have the power to undertake the sort of massive public works projects (roads, canals, harbors) routinely undertaken by the Romans, and the elite would not have houses as comfortable as Roman villas until the nineteenth.

The fall of Rome was one of the most dramatic events in the history of western Europe, and for most people one of the worst. If you want to know more, The Fall of Rome and the End of Civilization is a great place to start.
Posted by John at 7:48 AM