Person-Centered Design, or, the Pirate MRI 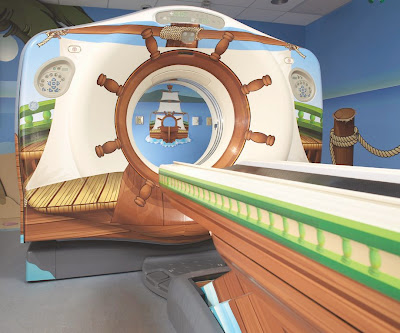 Doug Dietz is an executive engineer with General Electric and a designer of MRI machines. He thought his machines were great -- hey, they had won awards!-- until he visited a pediatric hospital and saw how terrified children were by the prospect of entering his machine to be scanned. Eighty percent of children were so scared that they had to be sedated before the procedure, requiring the services of an anesthesiologist.

Horrified, Dietz went back to the drawing board. He took a class in "person-centered" design, interviewed children and pediatricians, consulted experts. And he emerged with a series of different "adventures" for his young patients:


By thinking holistically about how children experienced and interacted with the technology, Doug helped transform the MRI suite into a kid’s adventure story, with the patient in a starring role. Making no changes to the complex technology inside the scanner, Doug and his ad hoc team applied colorful decals to the outside of the machine and to every surface in the room, covering the floor, ceilings, walls, and all of the equipment. They also created a script for machine operators so they could lead their young patients through the adventure. One of the prototypes is a pirate ship worthy of an amusement park ride. The ship comes complete with a big wooden captain’s wheel that surrounds the round opening of the chamber—a sea-faring detail that also makes the small circumference seem less claustrophobic. The operator tells kids that they will be sailing inside the pirate ship and they have to stay completely still while on the boat. After their “voyage,” they get to pick a small treasure from the pirate’s chest on the other side of the room. In another story, the MRI is a cylindrical spaceship transporting the patient into a space adventure. Just before the whirring and banging of the machine gets louder, the operator encourages young patients to listen closely for the moment that the craft “shifts into hyper-drive.” This reframing transforms a normally terrifying “BOOM-BOOM-BOOM” sound into just another part of the adventure. Including the pirate experience and the rocket ship, there are now nine different “adventures.”

With the new schemes in place, most kids can handle the MRI without sedation; some even ask if they can do it again.

And that is what good design really means.
Posted by John at 10:15 AM