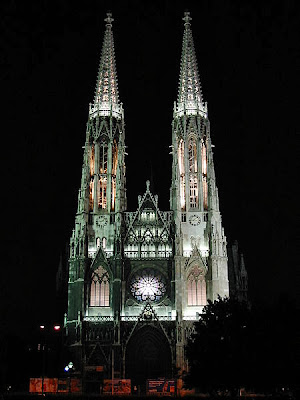 On Monday we took a look at the most famous medieval gothic church in Vienna; today, the most famous neogothic church. The Votive Church (Votivkirche) was built in the 1870s to give thanks to God for sparing the emperor's life during a failed assassination attempt. One day in 1853, Emperor Franz Joseph was out for an evening stroll with only a single companion when a Hungarian nationalist attacked him from behind with a knife. He survived, but was badly wounded; fortunately for him one of the passers-by was a doctor who gave the emperor prompt care, an act for which he was later ennobled. 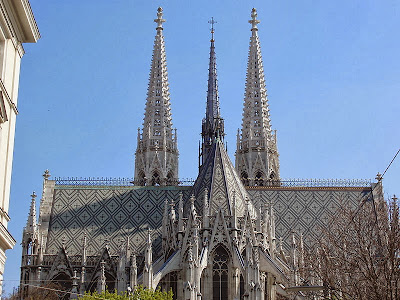 The emperor's brother, Archduke Fernidand Maximilian then launched a campaign to raise money from ordinary citizens to pay for building the new church. Tens of thousand contributed. 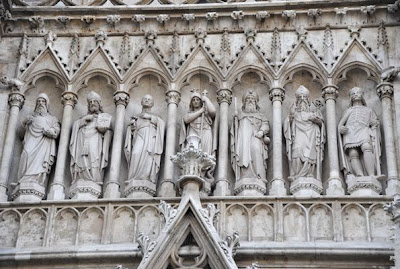 After a competition, architect Heinrich Ferstel's gothic design was chosen. Ferstel was a young man, only 26 at the time. 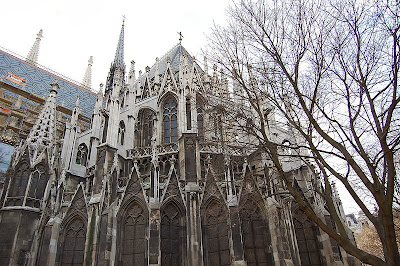 The choice of a particular historical style for the church was in keeping with how things were being done in Vienna at the time; the Votive Church was one of a whole group of prominent buildings of that period built in traditional forms. Julia Teresa Friehs:


The buildings that line the Ringstrasse were designed in the Historicist style, that is to say they were modeled on idealized versions of historical architectural styles but adapted to the technological and functional demands of the time in which they were built. The style chosen for each building was that which was held to best express its function Theophil Hansen designed the Parliament building in the Hellenistic style, in the belief that the form of government in classical Athens had given birth to the truest form of democracy. The neo-Gothic City Hall by Friedrich Schmidt reflected the civic autonomy of the cities in Flanders. The Votivkirche by Heinrich Ferstel was built in the French Gothic style, while in his designs for the university Ferstel took as his model the Italian Renaissance, the period when art and science flowered in Europe. The Imperial Forum is the last in this series, drawing on the fora of the Roman emperors. 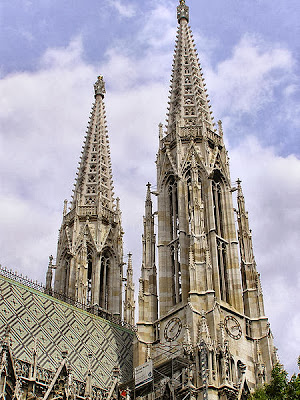 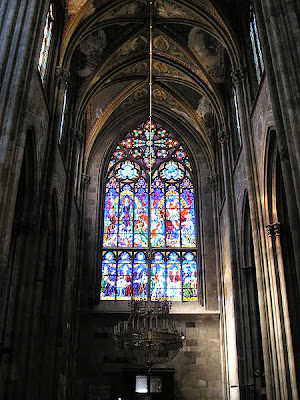 I am a fan of neogothic buildings myself, and I think this is a particularly fine example. Unlike an actual medieval cathedral, it was built in a short time under the direction of a single architect, so it has a unity of form very rare in medieval building. Not that variety in form is necessarily a bad thing; I have always liked the mismatched towers at Chartres. But in a building like the Votivkirche we see a gothic vision of the whole. 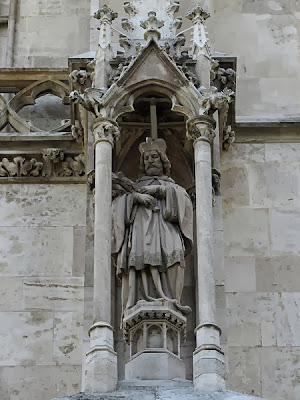 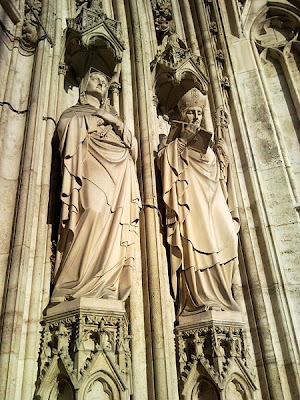 The sculptural program was also completed in a short time, in a consistent style, with many very fine statues. I shudder to think, though, what sort of reactionary royalist Catholicism underlies the choice of subjects. But, hey, it's gorgeous. 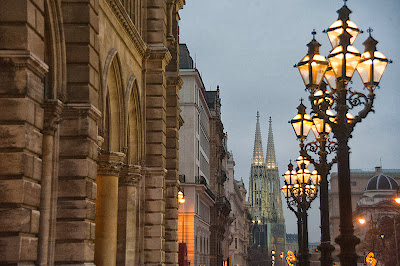 I do understand that there is something a little weird about flat-out copying a style from 500 years ago in a modern building, and I get why many modernists regard this sort of thing as fake. But how many modern buildings will ever be as much loved as this one is? How many will look as good after 150 years? Will any street of steel and glass buildings ever be as lovely, or as interesting, as the Ringstrasse with its medley of historical styles? Artistic integrity, expression of the contemporary spirit, blah blah blah. Build something beautiful.
Posted by John at 7:20 AM