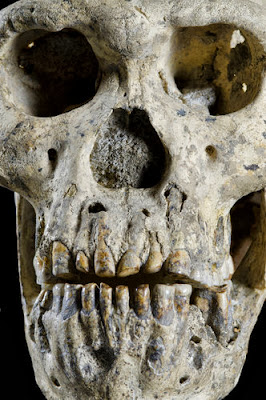 Like many other categories of humans, physical anthropologists can be divided in to lumpers and splitters. Some think every skull looks like its own species. Others see no separate species within the genus Homo, just a single lineage undergoing gradual change.

A new paper in Science by Georgian anthropologist David Lordkipanidze and numerous colleagues makes a strong case for the lumpers. The paper focuses on the remains of five people who lived 1.8 to 2.0 million years ago, found a few years ago in the Dmanisi cave in Georgia (above). The scientists argue that these five sets of remains, presumably belonging to a single population, would have been identified by some paleontologists as five separate species. The range of variation within these five skeletons, all from a single cave, is comparable to the variation found across all of Africa in that era. One of the authors even suggested that had the skull and lower jaw of the famous Skull 5 (top) been found separately, they would have been assigned to different species.

I am convinced, but then I am a lumper by nature. When I find some reactions from splitters, I'll pass them along.
Posted by John at 7:27 PM