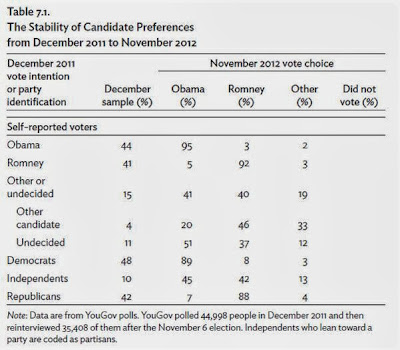 Ezra Klein has posted a bunch of graphs and tables that come from The Gamble, a book on the 2012 election by John Sides and Lynn Vavreck. The thing that struck me about all of this data was how set in concrete everything seems to be, with very little possibility of change. Consider the table above, which shows no change to speak of despite nearly a year of campaigning between December 2011 and November 2012. Those who were undecided in 2011 split almost evenly between the two candidates; it looks like Obama got a few more defectors from Romney than vice versa, but that may be a statistical quirk. Basically people vote based on their own self-identification (as liberals or conservatives) and on their general sense of how the country is going. The campaign made no difference. 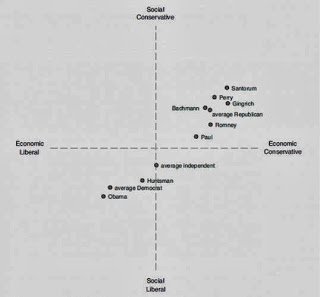 This lovely graph shows that by and large, the supporters of all the Republican candidates were ideologically similar, while Obama was very close to the average Democrat. Paul's and Huntsman's supporters were a little outside the mainstream, which probably explains why they never had a chance. One datum that spells trouble for Republicans is the location of the dot for "average independent." These people are moving toward the Democrats on social issues, especially (I suspect) gay marriage and contraception. But many of them support Republican economic policies. I think they do so because they perceive Republicans as fundamentally more serious about money, less willing to throw tax dollars away on quixotic schemes and less tolerant of freeloaders like bums, avant garde artists squatting in abandoned warehouses, and lazy people who keep trying to get themselves declared disabled. This is as much about style and vocabulary as budgetary priorities. I think the real danger for Republicans in their current shutdown mess is losing that presupposition that they are the serious people. If the average independent prefers Democratic social attitudes and is turned off by Ted Cruz's budget grandstanding and John Boehner's incompetence, how is he or she likely to vote?

But that is nibbling around the edges. The minds of 90% of Americans are made up before the campaign even begins, and they are set in their ways. Another graph Klein presents shows that  people hardly changed at all between 2008 and 2012, except that Obama lost 1% of every group. And this explains why Democrats are so excited about demographic change -- since the voters show no sign of ever changing their minds, the only way they can get more votes is if the country becomes more Hispanic and more Asian.
Posted by John at 10:11 AM