Archaeology and History: Robin Fleming, Britain after Rome: the Fall and Rise, 400 to 1070 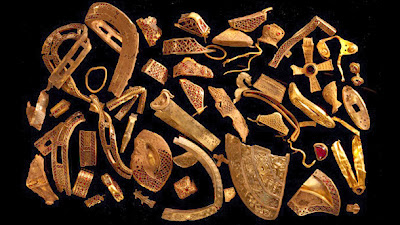 Archaeology and history go together like gasoline and sugar. For over a century historians have been looking to archaeology to fill in the gaps in the written record and extend our knowledge back into periods from which no documents survive. What they have discovered is that archaeology rarely answers historians’ questions. Instead, it raises its own questions. Sometimes these archaeological questions have a way of subtracting from historical knowledge, or at least from historians’ confidence, rather than adding to it.

Is it even possible to write history from archaeological sources? Yes, it is. Or rather, there is at least one person in the world who can do it: Robin Fleming.

Historian Robin Fleming just won a MacArthur “Genius” Grant for her innovative approach to Anglo-Saxon and Norman England. Curious, I ordered her most famous book to see what the fuss was about. Britain after Rome: the Fall and Rise, 400 to 1070 (2010) is a social and economic history of Britain between the departure of the Roman legions and the Norman Conquest, focusing on the daily lives of ordinary people. Because the written records give us only occasional glimpses of ordinary people and their lives, Fleming draws mostly on archaeological data. I am a historian and an archaeologist, and have been pursuing both professions for 30 years, but Britain after Rome is the only book I have ever read that successfully extracts a grand historical narrative from the archaeological record. I have some criticisms of Fleming’s work, and I think she is quite wrong about some things, but I want to make it clear that her accomplishment is remarkable. There is no other book like this one. 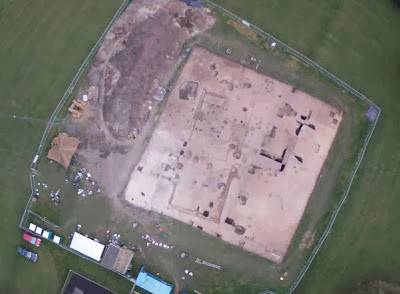 Fleming’s first achievement is the great mass of archaeological material she has managed to absorb. This is harder to do than it sounds, because the archaeological literature is designed to be impenetrable. Most excavations are “published” in fat, undigested reports issued by the museum or university responsible for the dig, of widely varying quality and generally horrid prose, and even these are available only in a handful of libraries. The better scholars eventually get around to putting their key finds in articles that appear in obscure journals or the annual volumes of various societies, but such publication is years late if it happens at all. For Anglo-Saxon England these badly-written reports, articles in local antiquarian journals, and annual volumes from obscure societies have been piling up for a hundred and fifty years, and mastering this material is no small feat.

But the vast body of material is essential to what Fleming is doing. She is writing a social history of an island with millions of inhabitants, and no single dig can be taken as typical of Britain. A book like hers could only be written about a handful of countries in western Europe where the archaeological tradition is extremely strong, and where important sites are protected by strong and sensible laws. For each topic she is able to cite multiple examples, from communities of squatters in Roman ruins to towns sacked by Vikings, and from these examples she builds a real narrative of social change. This is not an undigested mishmash of texts and artifacts, but a work of history built on archaeological foundations. Other attempts at combining archaeology and history usually end up as a sort of conglomerate, with cobbles of archaeology and cobbles of documentary evidence weakly held together by some sort of connective mudstone; actually, to keep the metaphor going, most of the archaeo-historical books I know are like cobble beds, and nothing but the covers of the volume really binds together the various little chapters on this cemetery or that king’s reign. Fleming gives us something quite different. Don't get me wrong – I have a whole shelf of those undigested mishmash books, and I have learned a lot from them. But they are not works of history in the way that Fleming's is. 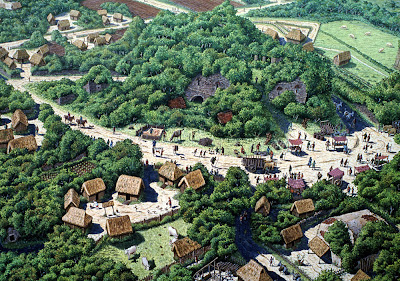 Fleming has a wonderful eye for the telling detail, always zooming in on the site or the burial that really opens a window into the past. These vignettes are the delight of the book, and Britain after Rome contains dozens. A few examples:
Sometimes Britain after Rome is not this fun. After all, reconstructing things like the origin of medieval nucleated villages is hard work, requiring the careful consideration of numerous excavations alongside the hints from written sources. It is to her credit that Fleming follows these topics through to their conclusions, no matter how confusing and complex the evidence. But reading this sort of analysis can be tough going. It is especially so because Fleming includes no illustrations other than a few pages of maps at the beginning. I find it almost impossible to imagine an archaeological site without a plan. I sometimes found myself wishing that Britain after Rome was a different sort of book, a big, fat glossy thing with tons of illustrations. On the other hand, perhaps something is gained in intensity by leaving out all of those distractions – none of the myriad glossy archaeological books I have read creates the sort of narrative momentum that Fleming does.

Fleming’s most important source is cemeteries. Tens of thousands of Anglo-Saxon burials have been excavated over the past century, providing a sample big enough for some real demography. The view from early medieval graveyards is grim: most people lived short lives troubled by disease. In one well-documented community, more than 90 percent of women were dead by age 35. Anemia, caused by intestinal parasites, was endemic, leaving many people physically weak. Not only did people die young; because of parasites, disease, and malnutrition, they matured late. Many medieval communities must have been constantly short of adult labor, leaving much work to be done by teenagers with the strength of modern twelve-year-olds. 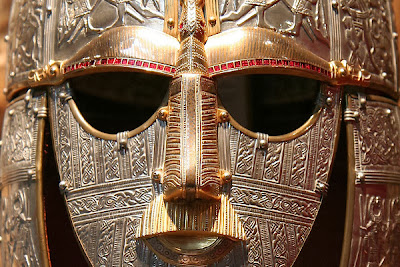 Because of the difficulty of the book, I would not recommend it to everyone, and I especially would not recommend assigning more than a chapter to undergraduates. But if you are seriously interested in “Arthurian” Britain, Anglo-Saxon England, or how to use archaeological data in historical writing, there is nothing better than this book.

Since it is the best book of its kind ever written, Britain after Rome raises a key theoretical question: are there topics social historians care about that simply cannot be approached through archaeology? I would say that there are, and that by giving such a thorough treatment of the archaeological data Fleming demonstrates its limitations. The most important case for me was the nature of the Anglo-Saxon “invasion” of Britain.

There is a written tradition, going back to the early sixth century, that says the first Anglo-Saxons in Britain were mercenaries who mutinied against their British employers and began seizing the island by force. The archaeology seems to say something quite different. The earliest Saxon cemeteries, dating to the mid fifth century and found in the Thames Valley and Essex, seem to be of ordinary farmers. These are poor people, buried without weapons. Their settlements are undefended, and they seem to have existed side-by-side with equally undefended settlements of ordinary Romano-British farmers. There is also considerable evidence for contact between the two peoples: hundreds of British place names survived, the genetics seems to show substantial intermarriage, many old community boundaries were maintained. The culture we call Anglo-Saxon seems to have emerged gradually from the mixing of British and barbarian elements, and not until nearly a century later do we have much evidence for Anglo-Saxon warriors, especially warrior aristocrats.

I see this evidence through the prism of my own work in North America. Consider this: in the Jim Crow era of the late 1800s, there is absolutely no archaeological way to distinguish between the homes of poor whites and poor blacks in the American South. It is very easy to tell either from the home of a wealthy person – archaeologists are good at class distinctions. But ethnicity is often completely invisible to us, and hence ethnic conflict is as well. I submit that if we did not have written records, we would have no way of knowing that half the poor people of the South were the members of a racial group that joined with the elite in violently oppressing the other half.

Cast your eyes back a few centuries to the European invasion and settlement of North America and you see further problems. Where is the evidence of violent conflict between Europeans and Indians? Yes, a few of the early settlements were fortified, but that had more to do with fear of the Spanish than fear of Indians. Most white settlers lived in scattered, undefended farms or villages, side by side with Indians. For the first century there is much evidence of contact between the groups: thousands of Indian place names passed into English, along with dozens of Indian words; European agriculture was transformed by Indian crops and techniques; European took up the Indian habit of smoking tobacco; there was a fair amount of intermarriage, and would have been more if native communities had not been ravaged by European diseases. But nobody across that entire period was in any doubt of who was white and who was Indian. Nobody ever mistook getting along for real affection. And nobody was surprised that the end result was the near disappearance of Indians from eastern North America, both culturally and biologically. I submit that if we have trouble seeing conflict between Germanic colonists and native Britons in the fifth century, that is a problem with our evidence. I simply do not believe that tens of thousands of immigrant farmers entered Britain and set up farms side-by-side with native farms – competing, as it were, for the same ecological niche – without conflict. I believe that if the invaders were able to impose their own language and their own identity on the hybrid culture that eventually emerged, they did so by military force. That, I submit, is how the world works. And this tells me that if something so vital to the history of Britain leaves no clear traces in the archaeological record, the archaeological record simply cannot tell us much that we would like to know.
Posted by John at 8:22 AM