A Nervous System Half a Billion Years Old 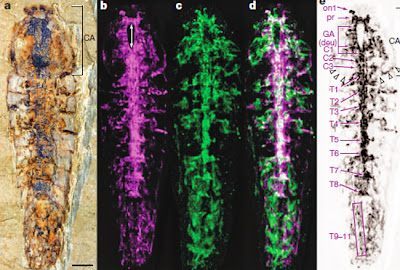 An amazing fossil was unearthed in China last year. It is the imprint of a common marine organism, Alalcomenaeus, but even though it is 500 million years old its preservation is so astonishing that scientists were able to extract a map of its nervous system. Fossil on the left; two different scans in the center, and then the two scans overlapped; on the right, map of the nerves.

It astonishes me that we can know such things about animals that lived in such a remote world.
Posted by John at 6:29 AM