The Future in a Vat of Yeast 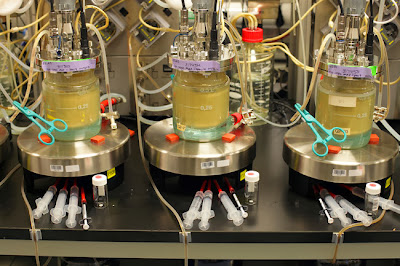 I am convinced that this technology is going to revolutionize our economy:


Vanilla, saffron, patchouli. For centuries, spices and flavorings like these have come from exotic plants growing in remote places like the jungles of Mexico or the terraced hillsides of Madagascar. Some were highly prized along ancient trading routes like the Silk Road.

Now a powerful form of genetic engineering could revolutionize the production of some of the most sought-after flavors and fragrances. Rather than being extracted from plants, they are being made by genetically modified yeast or other micro-organisms cultured in huge industrial vats.

In April, the pharmaceutical company Sanofi began commercial production of an essential malaria drug using baker’s yeast genetically modified by Amyris. The drug’s ingredient is usually extracted from a shrub that grows wild or is cultivated in China, Vietnam and various African countries. Amyris is also making a moisturizer for cosmetics that is typically extracted from either olives or shark livers. . . . “It’s really environmentally friendly. The whole process is sustainable,” said Toine Janssen, chief executive of Isobionics, based in the Netherlands.

Within a generation every sort of hard to get or expensive to make molecule -- especially drugs, but also scents, flavors, and so on, will be made by vats of genetically engineered yeast or bacteria.

But that's only the beginning. Farming may be revolutionized by perennial wheat and other perennial crops, drastically reducing the need for plowing and the soil erosion it causes; vat-grown meat may replace factory farms; and somewhere down the road will be genetically engineered pets that always look like tiger cubs or whatever else you can imagine. This technology is still in its infancy, and it already astounds; in a hundred years, who knows what we will make?
Posted by John at 8:17 AM